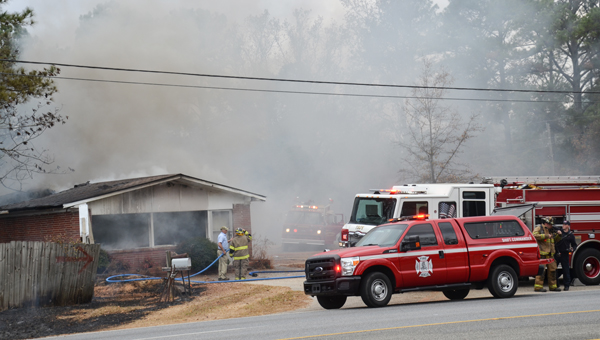 A fire that started on the roadside three miles south of Brundidge around 12:44 p.m. Monday burned about four acres of brush and came dangerously close to an occupied house before it was brought under control by several local fire departments.

Hamilton Crossroads Fire Department, which is stationed about a mile from the scene, was the first to respond to the roadside fire.

“The fire started on the roadside but we have no idea how,” said Jesse Senn, Hamilton Crossroads Fire Department assistant fire chief. “The fire spread through the brush and caught a small building on fire and did extensive damage to it. A car that was parked behind the building was probably a total loss. “

“The brush fire moving in the direction of a house was a real concern,” Senn said. “The brush burned up to about four feet of the house before it was contained.”

The potential danger of the fire was such that the response by local fire departments was widespread.