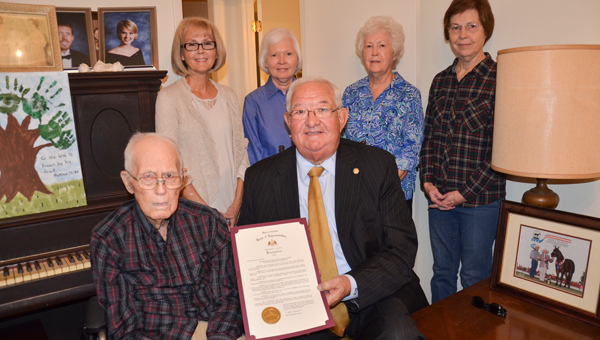 John Virgil Botts of the Enon community received a proclamation from the Alabama Legislature Saturday honoring him on his 100th birthday. State Rep. Alan Boothe presented the proclamation to Botts at a birthday celebration at his home. Pictured at the presentation are Botts, Boothe and Botts’ daughters, Rosemary Leggett, Kathie Brown, Barbara Norwood and Brenda Riley.

John Virgil Botts celebrated his 100th birthday Saturday at his home in the Enon community surrounded by family and friends.
His four daughters, Brenda Riley, Barbara Norwood, Kathie Brown and Rosemary Leggett, hosted the party in honor of their dad’s life well lived.

Botts is a native of the Enon Community and was educated in the Enon primary and secondary schools. He is a graduate of the high school in Brundidge.

Riley said her dad attended the Alabama Polytechnic Institute (Auburn University) with plans to earn a degree in electrical engineering. However, he was encouraged to take practical courses and did not receive a degree.

“Dad went to work at Brookley Air Force Base in Mobile and worked there in civil service until the base closed,” Riley said. “He then went to Warner Robins, Georgia where he worked in civil service.”

Botts was an inspector for government contracts.

“He was a quality control expert,” Riley said. “One of the most interesting things that he did was inspect Air Force One. On one of the inspections, Dad found something that he didn’t like and Air Force One did not pass inspection.”

Botts served in the Navy during World War II, from 1942 until 1944. After he served his country, he continued working with the United States government in civil service and retired after 30 years.

“When Dad retired, he came home to Enon,” Riley said. “He wanted to spend his retirement of the farm, so he raised cows and enjoyed everything outdoors. Dad loves Enon and he loves Pike County. He has enjoyed his retirement here at home.”