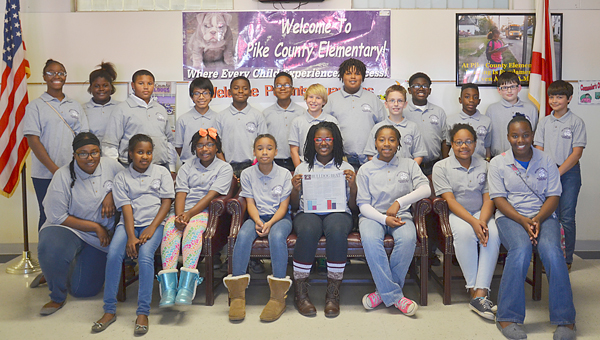 November 18, 2016 was a READ-Letter Day at Pike County Elementary School in Brundidge.

The first issue of the school’s student newspaper, “Bulldog Beat,” hit the stands and every student was reading all about his or her elementary school “where every student experiences success.”
“I could not be prouder of the outstanding work our students have done on the first issue of ‘ Bulldog Beat,’” said Tracy Arnold, principal. “This is their product from start to finish and they have done an excellent job.”

Arnold said the “Bulldog Beat” staff has taken great pride in the student newspaper and the student body is excited to have a publication that is all about Pike County Elementary School.

The lead story in Issue 1 of “Bulldog Beat” was from the Public Affairs Research Council of Alabama. The article stated that 69 percent of the PCES students qualify for free lunches and that the poverty level percentage is 86 percent. Those numbers are reason enough to give both teachers and students permission to fail but that’s not what happens are PCES, the article stated.

“We find ways to succeed and ‘Bulldog Beat’ is one of the many ways our students find success,” Arnold said.

Assistant Principal Rodney Drish approached Arnold with the idea for a student newspaper and she was immediately on board for anything positive for the students.

The idea for the student newspaper was to bring together a group of students whose talents and abilities could be used, collectively, to produce a newspaper of interest and meaningful content, Drish said.

“We knew a student newspaper would take a lot hard work and additional work for the newspaper staff but the students were excited about the opportunity to actually publish a newspaper,” he said. “We were fortunate to have members of the staff of the Troy University student newspaper, ‘The Tropolitian,’ come work with us. They provided great leadership.”
The PCES students had a lot to learn. They were responsible for everything from content ideas to actual page layout.

“The students were eager learners and they listened; they asked questions and they produced a very good student newspaper,” said Bedsole, Trop editor.

The staff members learned the how, when and why of newspaper writing and editing. They developed interview skills. They learned to take and edit photographs. They learned about page layout and they learned salesmanship.

“We loaded the bus and took the staff around town and they sold the ads and then designed the ads,” Drish said.  Patrick Countryman said selling the ads was “not all that hard.”

“People were nice and said the student newspaper was a good idea and then they bought an ad,” he said. “We made enough money to buy a laptop and camera for our staff.”

The articles by the students featured the school’s teacher of the year, the school nurse and the honor roll students, the 4-K program, the STEM program, the football team and special events, including the Parent Expo and Music Under the Moonlight. Anaisha Border said she never thought about all it takes to publish a newspaper.

“We read it and don’t think about all the work it takes to put out a newspaper but it’s a lot of work,” she said. “We all worked hard and we learned a lot. We can’t wait to get started on one for the spring.”

Drish said a spring edition of “Bulldog Beat” is on the drawing table and he expects an even greater level of interest and enthusiasm as the staff begins work on Issue 2.

“Student enthusiasm was high,” he said. “They really enjoyed reading about their school. I think we are on to something really good with ‘Bulldog Beat.’”