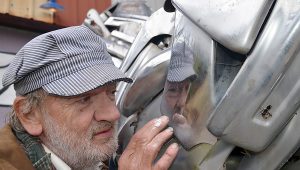 The 16-foot rooster made from chrome car bumpers is now at home at the Godwin’s metal fabrication shop in downtown Brundidge. The rooster is the creation of Brundidge artist Larry Godwin. His brother, Ronald, plans to restore the rooster to its crowing days. The Giant Rooster was originally mechanically attached to a 1964 Chevelle and had moving parts that gave it the appearance of strutting down the street as it motored in parades. The rooster advertised Bob’s Feed in Brundidge won top prize in a Peanut Festival Parade in Dothan.

For years, maybe 10 or more, a giant rooster made from chrome car bumpers had been a show-stopper at Art Wurks on busy U.S. Highway about three miles south of Brundidge.

Motorists from all across the country would brake quickly at the sight of the giant rooster that glistened in the sun. Motorists would turn their cars around or back up and pull off the roadway. Passengers would pile out of their vehicles to have their photographs taken in front of that amazing, funky rooster.

The giant rooster, the work of Brundidge sculptor Larry Godwin, has been featured in publications including “Roadside Wonder of Alabama” and television programs such as “Alabama Art Seen.” The rooster has not quite gone viral on the Internet but a lot people have posted their photos with the rooster and encouraged motorists to route their trips to include the unique photo op.

But the giant Rooster is gone – gone home to roost, said Ronald Godwin, brother of the artist.

“Since Larry is sick and in a health care facility and Art Wurks is closed, I thought it was time to bring the rooster home,” Godwin said. “This rooster has a lot of history behind him and he’s just one of many giant metal sculptures that Larry did to advertise Bob’s Feed, which was founded by our dad, Robert Godwin.

“Larry also fabricated a huge horse, in fact two horses,” Godwin said. “He did a bear, a dog, a catfish and several pigs or hogs. He did a lot of work for other folks. One of the pigs – the one in Dothan – was painted red with an Alabama logo and, at Christmas, it had lights strung all over it. Somebody did the same thing with one of Larry’s pigs he sold to a barbecue house. Those pieces are works of art, Larry’s art and he’s one of the best metal artist anywhere around.”

For that reason and because Brundidge is Larry Godwin’s hometown, his brother wanted the giant rooster to come to roost at home.

“Larry sculpted the rooster out of chrome car bumpers he got at junkyards,” Godwin said. “Larry was a great sculptor with a mechanical mind. He had the idea for this rooster to strut and turn its head, this way and that way. So, he rigged up a 1964 Chevy Chevelle so, when the car was moving, so would the rooster’s head and feet. You can imagine how heads would turn when this big ol’ 16-foot rooster came strutting down the street.”

Godwin said his brother’s rooster won the best of the parade at the National Peanut Festival in Dothan.

“I believe it was around 1970 but maybe not,” he said. “But I do know that the struttin’ rooster was the hit of the parade.”

The giant rooster is not so shiny anymore and it’s been many rusty years since the rooster has done any strutting. It’s now in dry dock at Ronald Godwin’s metal fab shop in Brundidge. It’s loosely connected to the rusty, skeletal frame of the Chevelle that once gave it life.

Although some might consider the rusty rooster a piece of junk, Ronald Godwin views it as a creation by a master artist.

“It’s going to take a lot of time but I want to get the ol’ rooster back like Larry had it,” Godwin said.

“I don’t have his mechanical mind but I can make the rooster look good again—make it shine.  “I want to do this for Larry. He deserves it. And, it’ll give him something to crow about.”