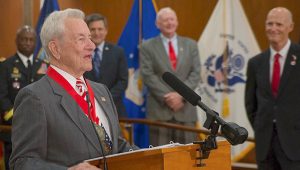 Brundidge native Chief Master Sergeant Charles E. LeCroy was inducted into the Florida Veterans Hall of Fame. He is a 1947 graduate of Pike County High School.

Chief Master Sergeant Charles E. LeCroy, a Brundidge native, has been inducted into the 2015 Florida Veterans Hall of Fame.

LeCroy is a 1947 graduate of Pike County High School. He is the son of the late J.D. and Nellie Steed LeCroy.

“We are so proud of Dad and honor his 22 years to service to his country,” said Donna Thornton.

“His service in the United States Air Force spanned the Korean and Vietnam conflicts.”

Florida has the second largest population of military veterans in the nation more than 1.4 million.

“Many of theses veterans dedicated 20 to 30 years or more to the service of our country and some continue serving fellow veterans, active duty military and their communities,” she said.

In 2013, the Florida Veterans Foundation developed an avenue to recognize “The Best of the Best” through the Veterans Hall of Fame. There are as many as 250 nominations each year.

“Chief Charlie” is one of them. He is a patriot extraordinaire with a proven lifelong record of service to his country, to the state of Florida and to his “hometown,” Tallahassee.

“Among other offices, Dad has served as the American Legion Post 13 commander for five years,” Thornton said.

“He consistently visits ill and disabled veterans in hospitals and rehabilitation centers and in their homes.

“He is a key contributor in planning the annual Memorial Day events at the city cemetery honoring all deceased veterans and has been invaluable in orchestrating events and activities in other organizations.”

Thornton said, while holding the office of director District 1 in the Florida Veterans Foundation, LeCroy assisted in providing immediate relief to veterans and their families.

“Dad, like so many veterans, continues to make a difference in his community and in our country,” she said.

Charles E. LeCroy has been recognized as an exceptional patriot. His name is memorialized on a bronze plaque inside the Florida State Capitol Rotunda. Other inductees in the Florida Veterans Hall of Fame include governors, generals, admirals, colonels, legislators, and other dedicated military servants.