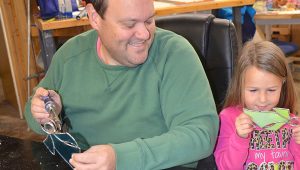 Adams Glass Studio on Highway 231 between Troy and Brundidge this weekend. His daughter, Macy, stops by often for a quality check. Charles and Mary Adams have been hosting open house at the studio for more years than they can remember. The Open House begins with a Wine and Cheese event Friday night and continues through the weekend.

The Christmas tradition of Open House at Adams Glass Studio continues this weekend beginning Friday night, from 6 until 8 o’clock with wine and cheese and continuing Saturday from 9 a.m. until 5 p.m. and Sunday from 1 until 4 p.m.

Charles Adams said this year’s event will signal a changing of the guard, so to speak.

Adams hinted that he is turning the majority of the “glass making” over to his son, David Adams, who is “a better glass artist than I am.”

But anyone who knows Charles Adams knows that the only sitting around he’ll do is with a soldering gun in his hand. Adams has been creating glass art since back in the 1960s when he was a student of Ed Walter at Troy State College.

“I learned from the best,” Adams said. “And, David does some of the best glass art I’ve seen. It’s time for me to get out of his way and let him do the glass art that the younger generations like and want. I’m from the old school.”

Charles and Mary Adams are not sure how long they have been hosting Open House at the studio and nut house the Friday after Thanksgiving.

“But it makes Thanksgiving special for us and our family,” Adams said. “We enjoy having everyone come by and visit. It’s what Thanksgiving is all about—family and friends.”

The Adams father and son duo will have a large number of new creations on display including Christmas angels, ornaments, sun catchers and nativity scenes. They also have creations that make unique and sentimental gifts.

This year, the Adams Open House will feature a selection of “Sweet Home, Alabama” items as well as college logo desk toppers, sun catchers and window panels. David Adams has designed Alabama glass items that highlight the state’s agricultural products, cotton and peanuts; the state flower, the camellia; and the state’s rival teams, Auburn and Alabama. He has also designed Troy University logo items including sun catchers and desk toppers and ornaments.

The glass artists have a large collection of ornaments for the tree or for year around display.

“We have Santas, snowmen, elves and Christmas trees and wreaths,” Charles Adams said. “We’ve got golf balls and every other kind of ball and dogs, cats and birds. An ornament for just about every interest.”

Charles and David Adams are not the only artists that have items on display and for sale. Featured guest artists will include, Dawn Peretiz, potter; Charles Rabbit, wood clocks; Carol McCrady, papyrus angels; Wally Lowery, folk artist; and Rex Thrash, rustic bird houses and walking sticks.

And, it’s probably safe to say that Charles Adams couldn’t be beaten away, even with one of his friend’s long and heavy walking sticks. So be there this weekend for Open House at the Glass Studio – “and nut house.”