Local leader: Johnson represents Troy and community on and off the football field

On this week of Thanksgiving break when many students find themselves sleeping late and doing anything but going to class, Troy University receiver John Johnson and a handful of his coaches and teammates found themselves at the Noble Manor Assisted Living Facility in Troy, visiting with senior citizens.

Their purpose was to wish them a happy Thanksgiving, and to tell them that they are remembered.

Troy University Head Football Coach Neal Brown has placed an emphasis among his players and coaches. That emphasis is family is always a priority, and that family runs not only through bloodlines but also through the bond the coaches and players have forged.

Johnson, a native of Troy and graduate of Charles Henderson High School, is one of the first  players the coaching staff turns to when the Trojans want to put their best foot forward, and Johnson has seen that positive energy translate into a much improved football program. 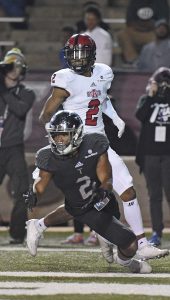 Photo/thomas graning
Troy native John Johnson is considered a leader for the Trojan football team. The Charles Henderson High School alum has been looked at as an abbassador for the Troy football game.

Brown remembered that it was Johnson’s twenty-first birthday this past Monday, and he appreciates the example the junior receiver sets on and off the field for the Trojans.

“Without a doubt, John’s the kind of guy we try to push to the forefront, especially here in Troy and Pike County,” said Brown. “He’s a guy that not only does well on the football field, but extremely well in the classroom, in a difficult business major (Risk Insurance). He’s got over a 3.0, and we’re proud of him in a lot of aspects.”

Offensive Coordinator Kenny Edenfield recognizes the heart of Johnson, and what it means not only to the community, but the university as well.

“Any time we have recruits come in, he is one of the hosts,” said Edenfield. “Any time we give out turkeys during the holidays with Coach Brown and some of the players, he will be part of that. He volunteers for all of that kind of stuff, and that shows what kind of person he is. I do think he is one of our leaders on our team, and our guys look up to him.

“He has always been like that from day one. He has been a young man that has never been in trouble, he always has done what he has been asked to do, and he makes really good grades. He takes care of his business, and I think he is a great role model for all of the people around, not just for Troy and Pike County, but all around in general. He came in as a freshman and played and had success, and he could have let it go to his head but he never did. He’s a really good example.”

The Troy University offense has been on pace to set numerous school records, and junior quarterback Brandon Silvers has looked to Johnson and his receivers to keep the defense off balance.

Entering Saturday’s 3 p.m. kickoff at Texas State, Johnson has 24 receptions for 305 yards and two touchdowns despite missing most of the first three games due to illness. The Trojans, 8-2 on the year and looking to rebound from a loss to Arkansas State in Troy last week, aim to get back on track with two regular season and one bowl game remaining.

“The mood of the team is taking responsibility for your actions,” said Johnson. “Coach Brown pretty much said everyone needs to be a man. The definition of a man is somebody that is accountable for their actions. Good teams cannot just be like, okay, we played bad, without going in and trying to fix the problem. If you don’t address it, it will happen again later on in the season, and later in life.”

As a student at Charles Henderson, Johnson could see Veterans Memorial Stadium from his high school campus, he played his home football games there on Friday nights and made it a point to be there for Troy University home games.

“Just growing up here, I got to come to almost all of the games,” said Johnson. “I just love the feeling of being in this stadium. I was very happy when I got the call and got an offer to play here. It’s just amazing to be able to play college football in the city you grew up in and having all the support from the community.”

Johnson also is still very much in touch with the CHHS football players and coaches.

“I have a lot of them on social media,” said Johnson. “A lot of those players have my number, and they will text me and ask me what they need to work on, and I’ll give them some pointers. I’m still really cool with all the coaches, and I talk to them every now and then. Me and two teammates went and gave a little speech to the teammates not too long ago. Emanuel Thompson and Justin Lucas, just talked about fighting for each other and not worrying about outside forces.

“I talk to a lot of them (CHHS players), Jabronski WIlliams and Jarred Wilson for example, about giving back to the community and staying away from bad things and bad people that could influence you to make bad decisions and not help you to further your career, and just make smart decisions.”

Troy University posted records of 3-9 and 4-8 before roaring to an 8-2 record thus far this season. Johnson said he and his teammates have noticed the excitement in the community, and they appreciate the support.

“As a player on this team, we want to thank every one in the community for all of the support we have received this season,” said Johnson. “Thanks for everything, especially for staying at the games. We noticed in the past when a lot of people would leave at halftime, and it showed that people cared about us this year because they were staying for the whole game. From the team and me on to everyone else, we really appreciate that.”