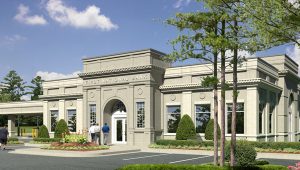 Messenger photosubmitted
Above, design art for the new First National Bank branch that will be built at the new Park Place development. The branch is expected to be open in mid-to-late 2017.

First National Bank is taking a big step and opening a brand new branch in Troy at the Park Place development on U.S. 231.

President John Ramage spoke about the new branch of the bank and how it fits with the history of the bank that has been in his family for 112 years.

“We’re really excited about this project,” Ramage said. “We’re in the process of constructing a new banking facility in Troy at the Park Place subdivision. What we’ll end up doing is consolidating Troy operations into that single branch. The Park Street branch will eventually close and be consolidated into the newly constructed Park Place branch.”

Ramage said that the decision to move the bank is partially due to location and making the bank more easily found.

“The real reason behind all of this, really, is nowadays ‘bank’ is a verb.,” Ramage said. “People bank and you’ve got to be there where they bank. This will obviously be a much more visible location. We feel like this is a move that carries us forward for a generation.”

Ramage conducted two market studies to make a decision and ultimately decided that both branches couldn’t be kept open.

“Often times you don’t have the president being housed in a branch, but my primary office will be in Troy,” Ramage said.

The current plan is for the bank to open by mid to late 2017. The designs have been finished for the bank and Ramage is now just waiting for construction to move forward.

Ramage said the inside evokes a feeling of nostalgia, while the inside with state-of-the-art technology points to the present and future of the bank.

Ramage said the new location will continue the ideals of his great-great-grandfather, a cattlemen and entrepreneur who founded the bank.

“He wanted a place comfortable for the working man and families,” Ramage said. “We still hearken back to those ideals today.”

The bank is the oldest in Pike County and one of the oldest banks in the state that is family-owned. Ramage is the fifth generation to own the business, and he’s working on continuing the business into the sixth.

“I have three daughters an one is in junior high school, so I’m getting ready to have some discussions,” Ramage said, laughing. “Maybe start with a part-time job at least.”