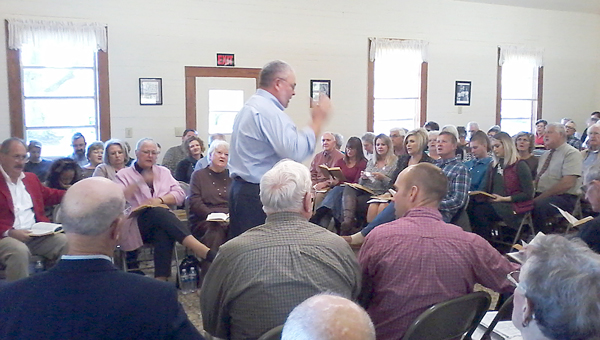 No one argued with John Senn Sunday afternoon when he stood and brought the Singing at the Old Country Church to a close promptly at 3:15 p.m.

To a one, the singers, from many denominations and from every corner of the county, would gladly have stayed for another hour or at least for “just one more song.”

“An hour’s not long enough and an hour and a half is too long,” said Senn, who along with his wife Mary, has hosted the singings at the Old County Church for 15 years.

And, for all those years, the spirit of the Lord has been in that little frame church.

“There are bigger churches and more regal churches but there’s just a spirit about an old country church that touches the heart,” said Margaret Ross. “When you leave the Old Country Church, you know that you have been in the presence of the Lord.”

The singings at the Old Country Church just south of Brundidge on busy Highway 231 are held only once a year, the Sunday before Thanksgiving.

Senn said there is no better way to give thanks for God’s many blessings than for voices to lifted in song.

The annual singing is reminiscent of the old “meeting house” singings of year’s past. However, the packed “house” Sunday afternoon was an indication that many people still enjoy the old-time way of singing.

“Everybody sings no matter how you sing,” Senn said. “We sing a cappella and we sing songs that most people know by heart. We’ll sing a few songs that aren’t all that familiar but are good songs with meaningful messages.”

Senn said he couldn’t speak for God but he thinks God was pleased with the praises that were sung to Him Sunday afternoon at the Old Country Church.

For John and Mary Senn, the singings are a blessing and they expressed love and appreciation for those who come with open hearts.

“Every year, we open the doors to the Old Country Church and invite everyone to come and sing,” Senn said. “Every year, I tell Mary that if people don’t come, we won’t have the singing next year. But every year people come. I think this year is the most we’ve had. So, we’ll be back at the Old Country Church next year, the Sunday before Thanksgiving from 2 o’clock until 3:15.”