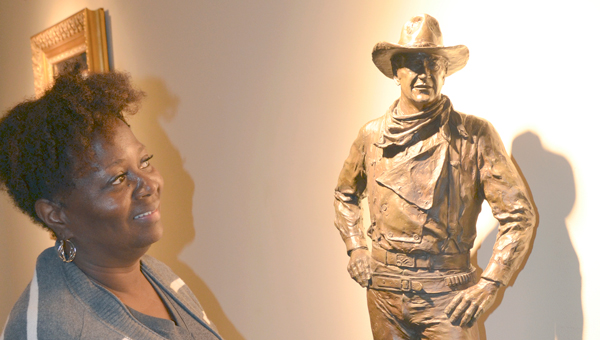 The Johnson Center for the Arts has altered its hours during Thanksgiving week to make the center accessible to students and visitors. The hours are from 10 a.m. until 5 p.m. Monday, Tuesday and Friday and until 3 p.m. on Saturday. Claire Murphy said the Booth Museum Wild West Exhibition is a “don’t miss” for those who have an interest in the Old West. Diana Whitaker is a fan of John Wayne who won the Academy Award for his performance in “True Grit.” The bronze statue of Duke is one of several featured at the Booth Museum Wild West Exhibition.

The Booth Museum Wild West Exhibition is open at the Johnson Center for the Arts in downtown Troy.

The artwork that includes paintings and bronze sculptures is on loan from the Booth Western Art Museum in Cartersville, Georgia. The Booth Museum features the largest collection of Western art in the United States.

Pritchett said the Johnson Center is committed to bringing a variety of art exhibits to Troy.

“Our Wildlife Exhibit was very popular because there is a lot of interest in hunting and fishing and the outdoors in general in our area,” she said. “There is also a lot of interest in the Old West. We have an outstanding rodeo arena at Cattleman Park and one of the largest Cattlemen’s associations in the state. We also have a lot of people who ride and train horses. The Booth Museum Wild West Exhibition will be of interest to a lot people in and around Pike County.”

Pritchett said the artwork on loan from the Booth Western Art Museum is outstanding and features many of the leading Western artists.

“What these artist do to bring the Western culture to life in amazing,” she said.

The Johnson Center offers an Art Search for each of its exhibitions, including the Western Art exhibit. The clues are actually guides that assist students as they view the artwork.

“We have Art Search cards in three age categories and the clues help students learn to look at art in such a way that their understanding of and appreciation for the pieces are greatly enhance,” Pritchett said.

The Johnson Center will have special hours during Thanksgiving week so that students and others may visit the JCA during the holidays.

“Students will be out of school and people will be in town visiting relatives so we want the Johnson Center to accommodate those who would like to visit the arts center,” Pritchett said.

Admission to the JCA is free.