CHHS FBLA ‘blends with the blue’ for tournament 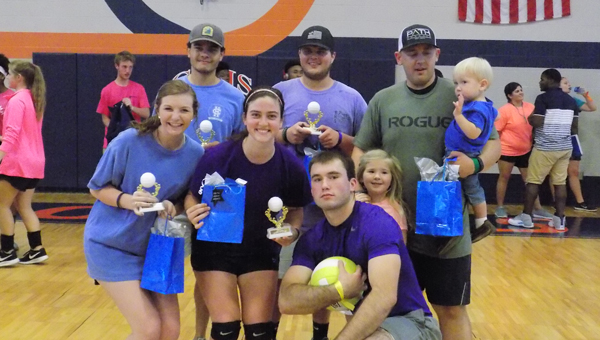 The Charles Henderson High School Future Business Leaders of America held a volleyball tournament on Thursday to have students and members of law enforcement interact. Above, the members of the purple team won the tournament. On the top row, from left to right, are Devan Suddith, Charles Tisdale and Sheriff’s Deputy Russ Thomas. On the bottom row are Addyson Bryan, Lindsey Fox and Sheriff’s Deputy Jacob Sanders.

Law enforcement officers and students at Charles Henderson High School teamed up on Thursday to participate in a volleyball tournament.

The event was put on by the high school’s Future Business Leaders of America (FBLA) club for their year’s community service project “Blending with the Blue.”

FBLA advisor Jennifer Sanders stated that the mission of the project is to “build stronger relationships and trust between our citizens and law enforcement.“

“They wanted to do fun activities to try to help the kids in the community see them as people,” Sanders said. “They wanted to break down those walls of uncertainty and build up those relationships.”

Two employees from the sheriff’s office were on the winning team that included four CHHS seniors.

Sherriff Russell Thomas said that his office is always glad to be involved with the community. “Any time we get a chance to do something in the community, we always try to participate,” Thomas said. “Participating with our youth is important. It’s important that we know them and they know us, and that they can feel comfortable around us.”

Russ Thomas, the sheriff’s son, participated on the winning team, but he said the event wasn’t really about wins or losses

“It was a great experience to be out and involved with the community,” he said. “As far as winning, it wasn’t about any of that really. They were nice enough to give us a gift basket and a little trophy, so we were appreciative of that. But it was just fun being there together.”

Sanders said that one of the leaders of FBLA, Malory Magrath, summed it up best when they came together after the event to reflect on the results.

“I think people are more afraid of the badge then the person now,” Magrath said.

FBLA president Cade Curtis said that the group is planning several more events for the year with a focus on getting the community at large more involved.