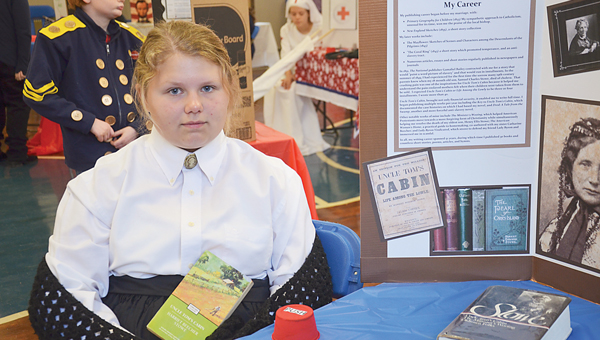 The auditorium at Banks School was transformed into a wax museum by the school’s sixth-grade students this week. The wax museum was a culminating activity for the students’ study of the Civil War. Annabella Earles, above, was fascinated by the writings of Harriet Beecher Stowe, especially “Uncle Tom’s Cabin.” However, she learned the author wrote several other books including children’s stories.

For most of the day Thursday, the sixth-grade students at Banks School could only speak when their buttons were pushed.

The school auditorium was transformed into a wax museum and the students were wax figures that portrayed men and women who played important roles in the Civil War. From Robert E. Lee, U.S. Grant, Harriet Tubman and Harriet Beecher Stowe to the unknown infantrymen, cavalry soldiers and skirt-tail spies, the students portrayed their characters realistically.

Sixth-grade teachers, Phyllis Jackson and Kristi Reaves, could not have been prouder of the interest their students displayed and the effort they put into “waxing” their characters.

“We were studying the Civil War and the students wanted to know more,” Jackson said. “They best way for them to learn more was through research.”

From their research, came the idea for a wax museum where each student had the opportunity to portray a Civil War character as a wax figure.

Each student chose a historic character, researched the role the character played in the Civil War and planned a short speech to share about that character when his or her button was pushed.

“Each student had a display board with a button,” Reaves said. “When visitors to the displays pushed the characters’ buttons, the wax figures came to life and told about their lives and their role in the Civil War.”

“She was inspiring because she was against slavery,” Annabella said. “I admired her for that.”
Ta’laysha Reynolds played the role of another Harriet, Harriet Tubman.

“She was very brave because she helped the slaves find freedom,” Ta’laysha said. “A lot of people were brave but she was one of the bravest.”
Genijha Calhoun also portrayed Harriet Tubman and found courage in her actions.

Mason Shaffer, a.k.a. Jefferson Davis, said he learned a lot about the Civil War and those who fought on both sides.

“The war divided our country but it came back together when the fighting was over,” he said.

Jackson said the wax museum provided the sixth-grade students with opportunities to learn more about the Civil War and also gave them a platform on which to share what they had learned with other students.