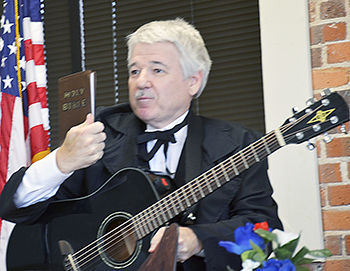 The Rev. Ed Shirley was the keynote speaker at the One Nation Under God breakfast hosted Tuesday by the Exchange Club in Troy.

The Rev. Ed Shirley, pastor of Brundidge United Methodist Church, was the keynote speaker for “One Nation Under God Prayer Breakfast” hosted by the Troy Exchange Club Tuesday at the Fellowship Hall of First Baptist Church in Troy.

Shirley told the story of America’s circuit riders in word and song.

Shirley said the early Christian influence in America was Catholic. The Protestant influence came later when the Pilgrims arrived at Plymouth Rock.

“As the frontier opened, the settlers were in need of prayer and encouragement,” Shirley said. “Around 1771, circuit riders, paced by Francis Asbury, began taking the gospel message to the people on the frontier. The circuit riders rode circuits, from 500 to 800 miles, preaching to the settlers. They would ride their assigned routes for about two months and then start back over. The circuit riders married couples and buried people. They were there to provide encouragement and hope to those whose lives were difficult.”

Shirley said camp meetings were the bright spots in the hard-scrabbled lives of the early settlers.

“The camp meetings were held outside on a wooden platform because the wood projected the sound forward,” Shirley said. “People would come on foot, on wagons and horses. The camp meetings would last from six to nine days. There was preaching and singing and times of fellowship. The settlers looked forward to the camp meetings.”

Shirley said the arrival of the circuit riders visit was also looked forward to with great anticipation.

“Life was extremely hard for circuit riders,” he said. “Life was rough in the American wilderness. There were mountain lions and panthers. There were so many deer that a man could be trampled by them.”

There was no law in the woods and circuit riders were fair game. The circumstances of their lives were such that many on them didn’t live past the age of 35.

Asbury is the most noted of the circuit riders. He traveled the circuit more than 300,000 miles, preached 17,000 sermons and organized more than 4,800 churches. Other circuit riders followed his lead. Together, they made life better for those who settled the frontier and are the unsung heroes of those times, Shirley said.

Jerry Beckett, president of the Troy Exchange Club, expressed appreciation to Shirley and to all of those who were a part of the program.

He said the National Exchange Club was organized in 1911 in Detroit, Michigan and was composed of business people who exchanged ideas about things of importance to their communities.

The Troy Exchange Club was founded in 1974 and meets weekly at its home on Walnut Street.

“The Troy Exchange Club has several annual projects including the Book of Golden Deeds Award that is presented to someone who is actively involved in the community,” Beckett said.

“The ACE Award is presented each year to a youth who has overcome great obstacles in his or her life.”

The Troy Exchange Club’s J.O. “Tip” Colley Award is presented to student/athletes who have exhibited excellence in both academics and athletics. Both a male and female are awarded the annual scholarships.

“The Troy Exchange Club is proud to have Freedom Shrines at locations throughout the county,” Beckett said. “Our ‘One Nation Under God Prayer Breakfast’ is an event that we look forward to each year.”

Beckett said the club’s primary fundraiser that supports its programs is the annual Vidalia onion sale.

“The Troy Exchange Club has been selling Vidalia onions for 20 years. We have probably sold a quarter million pounds of onions over the years,” Beckett said.

The Troy Exchange Club continues to be of service to the Troy community through its dedication and commitment to others.