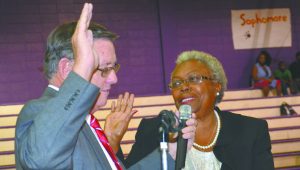 For the first time in nearly 40 years, the City of Brundidge has a new mayor.

Isabell Boyd took the oath of office before a large gathering of townspeople and guests Mondaynight at the Pike County High School gymnasium.

Boyd, a longtime Brundidge resident and former city council member, now fills the vacancy left by James T. “Jimmy” Ramage who chose not to seek re-election to the position he had held for nearly four decades.

Prior to Boyd’s taking office, Rosa Tyner, read a congratulatory letter from her brother, Georgia Congressman John Lewis, and then reminded the new mayor that she had been chosen.

“Don’t get the big head,” Tyner told Boyd. “Don’t forget you are going in for the people.”

When Boyd was growing up in the small Shiloh community, she probably never dreamed that she would one day be the mayor what must have then seemed like a big city.

Perhaps, even when she was elected and re-elected to Brundidge City Council, her thoughts were probably not on the mayor’s seat.

But, Body said it was her granddaughter who pushed her toward that loft goal.

“For 2016, people were encouraging me to run for the District 5 seat on the council,” Boyd said. “They said I could get that seat but my granddaughter reminded me that the Bible says not to look back, look ahead. I looked ahead.”

The new Brundidge Mayor said everybody will share in the future of the town and it will take everybody working together to accomplish great things.

The board voted to appoint Mayor Boyd to the PowerSouth Energy Cooperative board and Council Member Foster to the Southeast Alabama Gas District board. Council Member Arthur Griffin was elected mayor pro-tem.

In closing Boyd thanked all of those who supported her in her bid for the mayor’s position and the 1,002 voters who made it possible.