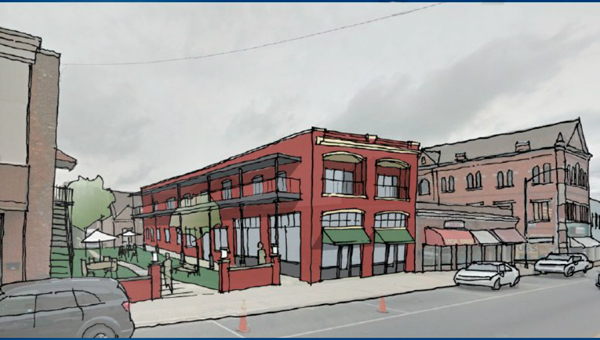 Concept art of a vacant lot on Three Notch Street reused to construct a new building for retail on the lower floor with office or residential above overlooking an outdoor courtyard.

The City of Troy released the draft of the Downtown Plan on Thursday for public comment and review.

The plan includes some big proposals including the conversion of traffic around the square to two-way traffic and the consideration of an amphitheater park area near the courthouse. Those possibilities, however, are still far from being implemented according to Planning and Zoning Administrator Melissa Sanders.

The actions listed as the highest priority in the plan include things like branding and the establishment of a downtown organization. These are things that Sanders said must be done before other strategies can be implemented and are the things that can be done more quickly.

“One of our top priorities is stakeholder commitment to branding,” Sanders said. “Without the commitment of property owners and business owners, you’re limited on what you can do. To get a brand to grow, one person can’t do it. One entity can’t do it. We need the help of all to make something grow.”

Some of the other improvements listed in the plan include downtown housing, wayfinding, gateway improvements, streetscape improvements, organizational partnerships, traffic circulation, pedestrian and bicycling improvements and more.

The majority of top priority actions relate to promotion, with vitality and linkages also marked heavily in the top priority.

The full document can be accessed at https://issuu.com/troyplanning/docs/draftdowntownplan100616.

Residents can also email Melissa Sanders at melissa.sanders@troy al.gov or call her at 334-670-6058 to requested a printed copy. The plan is open to public comment, which can also be directed to Sanders by email or phone, or in person at City Hall.

Public comment on the draft plan ends in October 13 and the finalized version will be presented to the Planning Commission at the October 27 meeting of the Troy Planning Commission. For more information, go to www.troyal.gov/planDT.