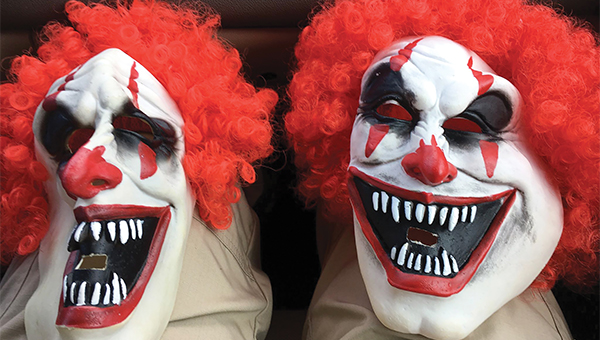 Police have identified the two juveniles that posed a menacing clowns over the weekend. Their masks were taken and their Facebook page was removed, but no charges have been filed at this time.

The two juveniles posing as menacing clowns on social media have been identified, Troy police say.

“We’ve identified the two individuals. We know who they are, we have the masks and we are in the process of taking down the Facebook page now,” Troy Police Chief Randall Barr said Monday morning.

Barr said both juveniles are males and attend Charles Henderson High School. No charges have been filed.

Bruce Matthews, a representative at the Pike County District Attorney’s office, explained why no charges were filed.

“The criminal law is very specific on the elements of the charge. In order for it to be a terrorist threat, the threat has to be made to a school, a building or some functioning location that would disrupt services,” Matthews said. “To be a threat against anybody, it has to be a threat against somebody in particular. I had a discussion with the chief and there was no discernable threat to any individual.

“Everything appears that it was a misguided prank with very, very bad timing. It was a horrendously erroneous prank.”

Matthews said local law enforcement officials had been aware of the national and regional reports of similar pranks. “We all anticipated some of this takeoff when we saw it in the national media,” Matthews said. “We knew there were going to be people out there that would do stupid things. The Troy Police Department has done a great job of jumping on this immediately.”

The Troy pair posted a Facebook video on Saturday afternoon under the account of “ClappyAndslappy DaClown,” in which they donned clown costumes and masks, wielded a knife and talked for nearly five minutes about “coming for you in Troy, Alabama.”

The video was viewed more than 50,000 times and added to the fears that began to surface on Friday.

“ We have interviewed the teens who have admitted to the posts and intended for the video to be funny and posted it as a prank,” Barr said. “Most of the people that saw the posts on Facebook did not see the post as anything to laugh about and we could not agree more. The dispatch center fielded several calls from concerned parents of Troy University students and social media went crazy.”

Barr said police received reports of clown sightings at a high school football game on Friday and on the Troy University campus on Saturday, neither of which were confirmed.

“We have not been able to verify any sighting of a clown anywhere in Troy, Alabama,” he said.

However, he said the department has received calls from concerned parents of university students, inquiring about the perceived threat to safety. “They’re concerned, but we’ve been able to explain the situation and reassure them their children a safe,” he said.

The Troy Police Department took control of the “ClappyAndslappy DaClown” Facebook page around noon on Monday and used it to post a status that the clowns had been caught.

“This is the Troy Police Department Detective Division informing everyone that we have taken control of this page and have interviewed both parties involved in the video. This page was made as a joke and the parties involved have been made aware of the seriousness of their actions. This page will be deleted in a matter of hours so please share so that we can get the word out that there is no danger from clowns in our city. Thanks and have a safe and blessed day.”

The juveniles apparently tried to dovetail on the national phenomenon of clown sightings in recent weeks across the southeastern United States including the Carolinas, Georgia and Alabama.

It all began in Greenville, South Carolina, in August when kids began reporting that there were clowns in the woods behind an apartment complex trying to lure them into a house.

More reports of a clown trying to lure children came about a week later in Winston-Salem, North Carolina.

In the following weeks, clown sightings began popping up in Georgia and creeping into Alabama. Although some of those reports were proven false and many of the others have not been substantiated, there have been some real threats and arrests made in those cases.

Last week, six schools in the Flomaton area went on lockdown after a group that called themselves the “Flomo Klowns” allegedly made a threatening phone call to an elementary school. Two juveniles and a 22-year-old adult have been arrested in that case.

Dothan schools were evacuated on Monday after a bomb threat was found after already being on “soft lockdown” due to clown threats.

More clown threats were also reported in Montgomery and Etowah and Calhoun counties on Monday, and two Birmingham area schools went on lockdown after receiving threats from clowns.

Two Daleville schools were also evacuated on Monday due to a bomb threat found on a mirror. Clowns on social media had threatened the schools the day before.

Barr was quick to reassure the public that the Troy incident in no way threatened local schools. “Although we have not received any threats directed at any of our schools the Troy Police Department is working closely with our local schools and Troy University to make sure that our campuses and our children are safe,” he said “We have school resource officers present each and every day on our local campuses and we have increased our patrols in these areas also.”

Barr also cautioned the public to be mindful of the creepy clown trends.

“The Troy Police Department strongly discourages anyone from dressing as a clown or wearing a clown mask for any reason due to the sensitive and threatening environment that this type of costume is currently under,” he said. “With Halloween right around the corner we certainly encourage parents to keep this in mind and work with their children to choose a costume that is safe and make Halloween a safe and enjoyable experience for them.”