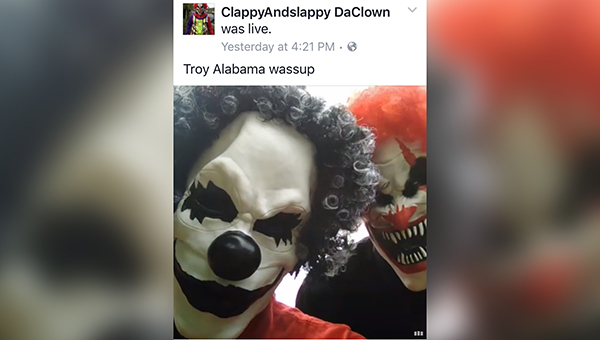 The two juveniles posing as menacing clowns on social media have been identified, Troy police say.

“We’ve identified the two individuals. We know who they are, we have the masks and we are in the process of taking down the Facebook page now,” Troy Police Chief Randall Barr said Monday morning.

Barr said both juveniles are males and attend Charles Henderson High School. No charges have been filed.

The pair posted a Facebook video on Saturday afternoon under the account of “ClappyAndslappy DaClown,” in which they donned clown costumes and masks, wielded a knife and talked for nearly five minutes about “coming for you in Troy, Alabama.”

The video was viewed more than 50,000 times and added to the fear and hysteria that began to surface on Friday.

Barr said police received reports of clown sightings at the Charles Henderson High School homecoming game on Friday and on the Troy University campus on Saturday, neither of which were confirmed.

“We have not been able to verify any sighting of a clown anywhere in Troy, Alabama,” he said.

However, he said the department has received calls from concerned parents of university students, inquiring about the perceived threat to safety. “They’re concerned, but we’ve been able to explain the situation and reassure them their children a safe,” he said.

The pair apparently tried to dovetail on the national phenomenon of clown sightings in recent weeks across the southeastern United States including the Carolinas, Georgia and Alabama.

Last week, six schools in the Flomaton area went on lockdown after a group that called themselves the “Flomo Klowns” allegedly made a threatening phone call to an elementary school. Two juveniles and a 22-year-old adult have been arrested in that case.

More clown threats have also been reported in Montgomery and Etowah and Calhoun counties today.