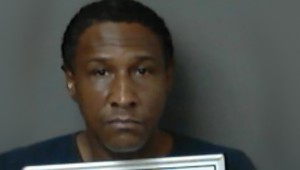 The Pike County Sheriff’s Office arrested a man on Wednesday in connection with the Sept. 4 robbery of a Marathon gas station in Spring Hill.

Samuel McErvin, 48, of Elba, was arrested and charged with one count of robbery in the first degree.

According to Lt. Troy Johnson, McErvin approached the gas station clerk and asked the clerk to make change.

Once the clerk opened the drawer, McErvin pulled out his hand, concealed in a bag, and order the clerk to give him the money.

The clerk refused and McErvin reached into the drawer, pulling out $50 worth of $5 bills. The clerk pulled a gun on McErvin and McErvin fled the scene and entered a small black vehicle.

A warrant was executed for McErvin’s arrest at his home in Elba, where Pike County Sheriff Russell Thomas said the vehicle used and the clothes worn in the robbery were found.

It’s unclear whether McErvin was actually armed in the Spring Hill robbery, but his actions still fall under first-degree robbery under Alabama law.

Alabama law states that: “(a) A person commits the crime of robbery in the first degree if he violates Section 13A-8-43 and he:

“(1) Is armed with a deadly weapon or dangerous instrument; or (2) Causes serious physical injury to another.”

“(b) Possession then and there of an article used or fashioned in a manner to lead any person who is present reasonably to believe it to be a deadly weapon or dangerous instrument, or any verbal or other representation by the defendant that he is then and there so armed, is prima facie evidence under subsection (a) of this section that he was so armed.”

Thomas said that McErvin was charged with robbery in the first degree because he created the pretense of having a weapon by concealing his hand in a bag.

Robbery in the first degree is a Class A felony punishable by no less than 10 years in prison and up to 99 years or a life sentence.

McErvin is also being charged with two robberies that occurred at New Brockton and Daleville convenience stores over Labor Day weekend.

The Elba, New Brockton and Daleville police departments assisted the Pike County Sheriff’s Office in the case. McErvin’s bond is set at $50,000 and he remains in custody.