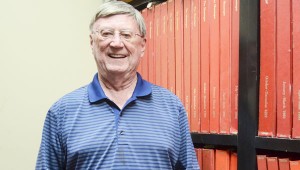 Dr. James Sherry, a Troy University professor, is teh 2016 National Senior Spelling Bee Champion. The Troy resident says he has been interested in spelling bees since he was a teenager and has been competing in them for more than 50 years. He has finished in the top 10 in several national spelling bees prior to winning this year’s championship.

Sherry. Age 74, entered the seniors spelling bee in July in Knoxville, Tennessee with the belief that he could bring home the title and the hope that he would.

For starters, he topped all spellers in the written portion of the national spelling bee with 57 words out of 60 spelled correctly. For that top finish, Sherry was given the opportunity to select his position for the oral portion of the spelling bee.

“Four has always been my lucky number so I chose chair number four,” he said. “All of the other chairs were designated by the draw.”

Ten spellers advanced to the oral round and Sherry took his place on chair four.

He correctly spelled words that most laymen could not spell or even pronounce, including quadriga, maladroit, subtilisin, socager and mystagogue.

On and on until round 11. Only Sherry and two other spellers were still standing.

Speller number nine listened as her word was called. “Carrack.” She attempted to spell the word. The buzzer sounded and Sherry was the champion.

“I was relieved. I was excited. I was happy, very happy,” Sherry said. “To win the National Senior Spelling Bee was my goal.”

Sherry finished in the top nine several times in the National Senior Spelling Bee before putting the “queen bee” in his corner in 2016.

He won the Justin Rudd National Spelling Beach in Long Beach, California in 2013 and that was quite a feather in his cap. The spelling bee went 27 rounds and Sherry was beginning to think there might not even be a winner.

He has top 10 finishes, five to nine, in four AARP spelling bees and now he is the National Senior Spelling Bee champion.

Some might say that Sherry is a natural born speller and he does admit that spelling comes rather easily for him. But he hasn’t relied on his “natural ability” to propel him to spelling bee championships.

“My interest in spelling bees actually started in Indianapolis, Indiana when I was 13 years old,” Sherry said. “I competed in the Indiana State Spelling Bee in the sixth, seventh and eighth grades. I won an Underwood portable typewriter and other prizes. That was really exciting for a young boy.”

As much as Sherry enjoyed words and the challenge of spelling them, he didn’t grow up with his nose stuck in the dictionary.

“I’ve known people who actually read dictionaries but I am not one of them,” he said.

However, Sherry admits that he does crack a dictionary in preparation for high profile spelling bees.

For the National Senior Spelling Bee in Knoxville, he looked to a 1,459-page dictionary for his study words. And, he enlisted the assistance of a student who called out spelling words to him for a couple of hours twice a week.

That was a benefit in that Sherry participated in the back-and-forth and lingo of a spelling bee.

“What made the National Senior Spelling Bee more difficult to prepare for was that proper nouns as well as common nouns were allowed,” said Sherry who teaches French at Troy University. “Knowing foreign languages is very beneficial when participating in a spelling bee and I have been a beneficiary.

Sherry has no plans to stop participating in spelling bees. In fact, his hopes are that the 2017 National Senior Spelling Bee will be held at Troy University in Troy.

“Troy University would be an outstanding host for the national spelling bee,” Sherry said.

“It would be exciting to have the spelling bee here and could possibly generate interest in spelling competition for people of all ages.”