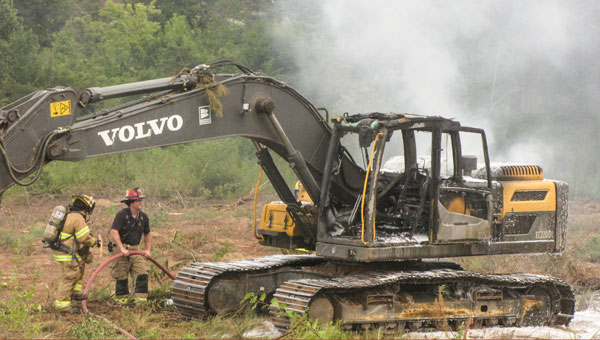 Firefighters work to extinguish an excavator fire that took place behind the Huddle House off of U.S. 231 South on Monday afternoon.

An excavator caught fire Monday while clearing land near the Huddle House on U.S. 231 South. Work was being done to develop the land Monday when one of the excavators suddenly caught fire while rounding a burn pile.

“When I swung around, I smelled something burning,” said Willie Christian, who was operating the excavator when it caught fire. “When I looked back, the back end was burning like hell, so I dove off of it.”

Troy Fire Capt. Curtiss Shaver said Engine 2 made the initial response to the fire and was able to control it with a single hose and extinguisher while waiting on another smaller truck to arrive from another scene.

“We really did a good job,” Shaver said. “The access was a bit difficult but we were able to get to it with a long hose.”

The cause of the fire remains under investigation.