End of the road: Troy’s season comes to a close with 5-3 loss to Texas in World Series elimination game 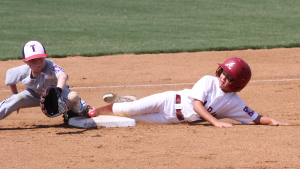 Photo/dan smith
The Troy Machine Pitch team’s season came to an end on Monday afternoon when they fell to Texas 5-3. Top: Alabama player Ford Hussey is safe as he slides into second base against Texas in the World Series Monday in Laurel, Miss. inset: Alabama (Troy) outfielder Owen Pugh makes a catch against Texas Monday in the Pitching Machine World Series in Laurel, Miss.

LAUREL, Miss. – Texas held off a late Alabama comeback in a 5-3 win Monday afternoon in the Dixie Baseball Machine Pitch 8-Under World Series, eliminating the state champions from Troy.

Alabama had won three games in the World Series in Laurel, finishing in the top six of the 12- team tournament before the loss to Texas.

“I’m so proud of these kids, and they came a long way,” Head Coach Bobby Hussey said after the game. “We were the host team for state so a lot of people probably thought we did not deserve to be in state but we proved them wrong. We came here and I think we represented Alabama well. Our kids fought the whole time they were here. This game we just played was very hot, and we had a lot of kids that had to come out of the game, especially our catchers to get some water, but through the whole game we knew our kids would not give up, and they didn’t.

“We had runners on base and a lot of opportunities. We played a very good Texas (Kilgore) team that had a great defense, and hats off to them, but hats off to our boys too. They fought hard, and I would not go into battle with any other 12 boys. They are awesome and I love each and every one of them like they are my own.”

Texas got on the scoreboard in the top of the first inning, added another in the second and three in the third for a 5-0 lead.

A comeback came up short in the bottom of the sixth inning for Alabama, as the young men were able to load the bases but could garner only one run and the Texas defense turned in big plays for the 5-3 final.

Alabama was led at the plate by Luke Barron, Slade Russell, Ford Hussey and Peyton Elliott with two hits each while Luke Sikes and Chase Vazanian had one hit apiece.