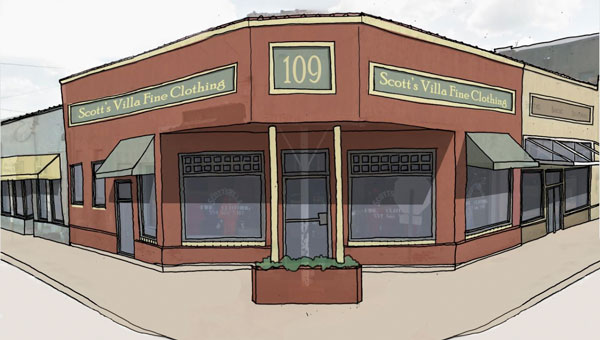 More concept art by KPS shows possible improvements to the facade of the building housing Scott’s Villa Fine Clothing on the corner of Elm Street and Market Street.

Downtown could be getting a whole lot greener, as preliminary design plans presented at Thursday’s downtown planning meeting showed the addition of several new parks and extra trees throughout the downtown area.

The extra greenery was just one portion of an illustrative plan presented by consultant Jason Fondren of KPS Group at the meeting. The plan included 10 recommendations in total, with four proposing parks and greenery.

The largest recommendation involving a park was the recommendation to turn the county-owned property behind the courthouse into an open space or park area of some kind.

“The land back there isn’t good for building much of anything on it, but it could be used well for an open park space,” Fondren said. “It could even hold an amphitheater.” A portion of the area could also be used for public parking, Fondren said. 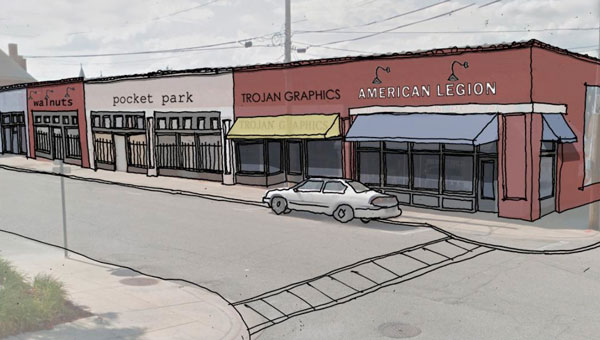 Concept art created by KPS Group shows what an how the facade of a building on Walnut Street could be improved. The concept art shows what the outside of a proposed pocket park and cafe might look like as well.

Fondren also recommended a pocket park that would utilize the roofless portion of the building on Walnut Street as a park, passageway and café with outdoor dining.

A third “parklet” was suggested at the base of the water tower in order to make better use of a landmark and to help cover less attractive areas. The small park wouldn’t necessarily serve a function, Fondren said, but could provide a nice place to sit for a few minutes before continuing to shop and dine downtown.

Also recommended during the presentation was an extensive streetscaping plan that didn’t just add trees to the downtown area, but also along the “image corridors” of Murphree Street, Montgomery/Madison Street, South Brundidge Street, Elm Street and Academy Street. Fondren clarified that the added greenery wouldn’t take away parking spaces.

Another recommendation was infill development: the construction of three new buildings in key areas that are currently vacant, namely the southeast corner of Love Street and Three Notch, the northeast corner of Church Street and Market Street, and a vacant lot on the west side of Three Notch between Elm Street and Walnut Street. 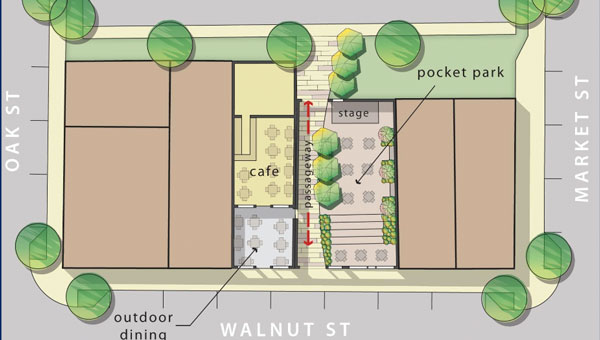 A top-down view of what the proposed pocket park could look like. The pocket park area includes tiered seating and an area for a stage or some other object of interest such as a fountain or statue.

“There are plenty of areas to have new buildings downtown, but these are the three that we found that were nearest to the square,” Fondren said. He mentioned earlier in the presentation that new buildings should stay in line with historic “build-to” lines instead of being pushed further back from the street.

The plan also incorporated things that had been talked about in previous meetings such as wayfinding, bicycle improvements, housing and parking.

“I thought it was great,” said Jack Norton, Troy planning commissioner. “I was really impressed with the presentation. He pointed out a lot of things that never even dawned on me that could be done. Now it’s just a matter of everybody getting together and saying ‘this is what we’d like to do’ and start work on it. It will take a lot work, but I think it can be done and that it will help downtown.”

The design and façade study was originally scheduled to be discussed at the previous meeting, but got pushed back due to time constraints after resident feedback took up the majority of the two-hour window set aside for the meeting.

“The level of resident interaction and feedback shows how important our downtown is to our community,” said Melissa Sanders, Planning and Zoning administrator. “The City of Troy welcomes citizen interest and participation in the plan. This is everyone’s downtown. This is the heart of our city.  It will take the participation, interest, dedication, and partnership of everyone to keep our downtown vibrant.”