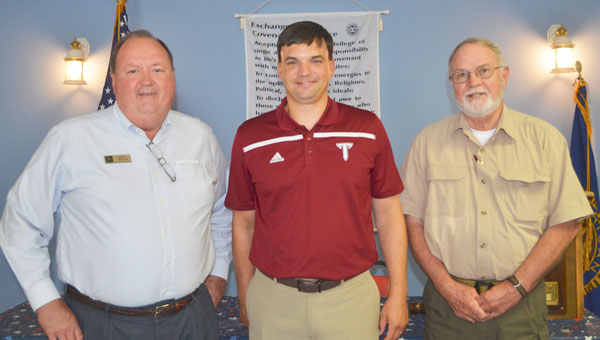 Troy University Head Football Coach Neal Brown recapped the Trojans’ 2015 season with members of the Troy Exchange Club Thursday. Although the Trojans finished the season 4-8, Brown said that doesn’t tell the story of the season where there were many positives that will carry over into the 2016 season that includes six home games.

“We lost to some outstanding football teams including the Wisconsin Badgers, the North Carolina State Wolf Pack and the Mississippi Bulldogs,” Brown said. “All three were Bowl Teams. We lost four games by six points or less. Appalachian State took three overtimes to take a  hard-fought 44-41 win and we closed out the season with a 41-17 win over Louisiana’s Ragin’ Cajuns.

The Trojans are not looking to be a team of destiny. They are going to be a team that is prepared for every game, he said.  “We have some kids coming back that will be ready to play. And, we’ve got a lot of speed on this team. Several kids run a 10.6 or better. The offensive line is the big question mark.”

Brown said if there is a weakness in this year’s team it will be in the secondary. “Our punter and snapper are back but we have to replaced the field goal kicker,” he said. “Ready or not, it’s time to get prepared and we are exciting about the season. We’ll be ready to play.”

Brown told the Exchange Club members that bids on the expansion of the north end of the Veterans Memorial Stadium will be accepted in August. And, that will be exciting for Trojan fans. Nearly two years ago Brown was watching Troy play on television. He noticed that it was hard to see the logo on the helmets. That will change as the Trojans are going almost exclusively with the Power T.

The team has bought in to Troy Athletics slogan, “One Troy.” “We have fans from many other places but our most important fan base is the Troy community,” Brown said. “For success, we draw from here — from our home fan base. We are re-visiting the Town and Gown relationship.”

FOOTBALL 101: From fashions to playmakers, ladies learn the ins and outs of the game during Troy University event

More than 100 women from the Pike County community participated in Troy University’s Football 101 event this week. The women’s... read more