FOOTBALL 101: From fashions to playmakers, ladies learn the ins and outs of the game during Troy University event 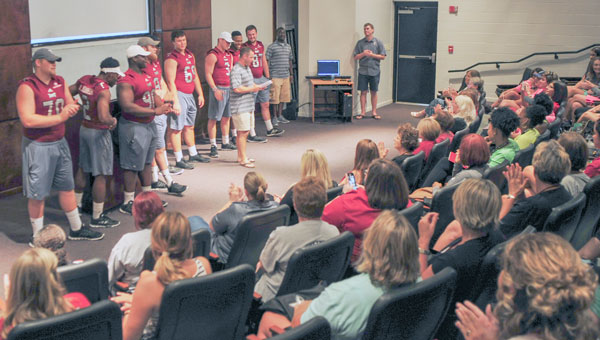 More than 100 women from the Pike County community participated in Troy University’s Football 101 event this week. The women’s clinic gives participants a chance to view the game of football in a different way. PHOTO BY JOEY MEREDITH

Move over men, the ladies are taking the field and they are game ready.

More than 100 ladies participated in Troy Football 101 Women’s Clinic Thursday at Tine Davis Field House. So, when the 2016 season kicks off, the ladies will view the game of football in a different way and with greater appreciation than ever before.

Hannah Mason, Troy University Development and Special Events, said the Troy Football 101 Women’s Clinic has continued to grow in size and scope since it was first introduced four years ago.

“Most of the women who attend are fans of Trojan football so they know about the game on the field,” Mason said. “But the idea of the clinic is for the women to come to the field house and see what goes on behind the scenes. They get to see the facilities, including the weight room and the equipment room. They attend a chalk talk about the game and even go through some practice drills. They have a lot of fun learning the game and all that it involves.” 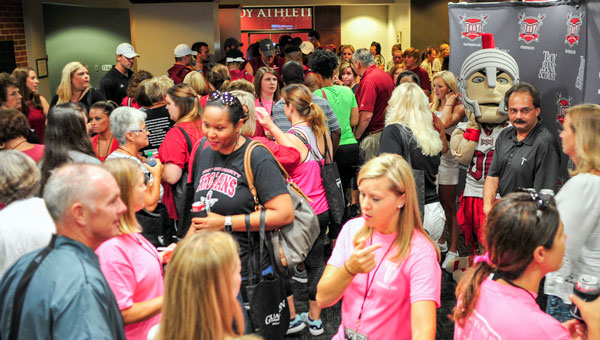 More than 100 women from the Pike County community participated in Troy University’s Football 101 event this week. The women’s clinic gives participants a chance to view the game of football in a different way. PHOTO BY JOEY MEREDITH

At the encouragement of a friend, Lauren Hager attended Troy Football 101 for the first time.

“My friend had a good time and thought I would enjoy the clinic,” Hager said.

“I know enough about football to enjoy the game. But I thought there was a head coach and a few assistants and that was it. I had no idea that there was an entire coaching staff. There are coaches that replay videos and coaches for certain players and for special teams and strength coaches and nutrition coaches. And it takes all of them working together to get the team ready to play. I just didn’t know that so much went on behind the scenes.”

Hager was also surprised that the game of football requires such a great amount of dedication from the players.

“Playing football is like having a part-time job or really a fulltime job and going to college at the same time,” she said. “It takes a real commitment from the players to practice and play and keep up their grades.”

Hager said she appreciated the opportunity to meet some of the players and put a face on them rather than just a number on the field.

The coaches put the 2016 Troy Football 101 class through some pass and catch drills but Hager was busy preparing models for the game-day fashion show.

“We showcased dresses and tank tops in Trojan colors that would be fashionable for the beginning of football season when the weather is still warm, or even hot,” Hager said.

The Troy University Trojans’ 2016 football schedule includes six home games, so this season will be a good time for Trojan fans to be more in the know about football.. and 100 of them will be graduates of 2016 Troy University Football 101.