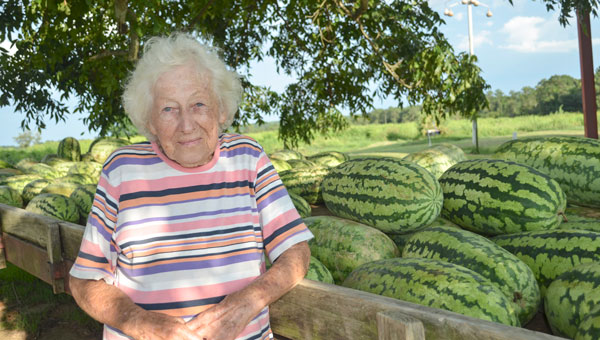 For 15 years, Mattie Renfroe and her husband, Hubbard have been planting and selling watermelons under the shade tree in their yard on Highway 29 just north of Banks. Renfroe enjoys the company of her customers, some travelers and some locals.

On Highway 29 just north of Banks and not yet to Josie, a couple of handmade signs are the only indication that motorists are approaching watermelon country.

Even so, folks who have knowledge of the sugar sweetness of the watermelons that grow on the Hubbard and Mattie Renfroe property know where to stop.

For 15 years, the Renfroes have been growing and selling watermelons under the shade tree in their side yard.

There’s enough business up and down busy Highway 29 to keep Curtis Renfroe in the watermelon patch more often than he wants to be.

“It used to be that Hubbard and I would get in his old blue pickup truck and go out in the patch and get a load of watermelons and stack them on the trailer for sale,” Mattie Renfroe said. “I don’t go anymore so Curtis, my son, gets somebody to help him and they pick and stack the watermelons on the trailer.”

Mattie Renfroe does most all the selling of the melons and enjoys the company of her customers.

“Being right here on the highway, we have a lot of people that stop in,” she said. “Most of them are local people but we do have travelers that see the signs and stop. We have one man that comes and loads up a trailer and takes the watermelons off to sell. Just the other day, he got 164 watermelons and he’ll probably be back soon.”

Renfroe said she and her husband realized a long time ago that watermelons could put a little jingle in their pockets. A little jingle can be encouragement to most any farmer.

“Curtis said he watched his dad plow with a mule, one row at a time, up one row and down the other,” Renfroe said. “Now, he’s got an eight-row planter and a GPS to drive it. Farming has changed a whole lot.”

But people’s taste for watermelon has not changed.

“Back when I was growing up, we had a garden that kept the family fed,” Renfroe said. “We planted a few watermelons just for us. We didn’t think about selling them and, if we had, nobody would have bought them because everybody had a watermelon patch.”

Renfroe said if someone had told her back then that she would be the overseer of a 15-plus watermelon patch and would be selling the sweet-tasting melons off a trailer for paper money, she would have laughed.”
Not many people today have watermelon patches. A tomato plant or two is about as close to farming as most people get.

“Growing watermelons is a lot of trouble and a lot of hard work,” Renfroe said. “You have to plant, fertilize and spray if you hope to make any melons and you’ve got to have a good bit of space.

Once the melons are ready, somebody’s got to pick them and that’s a job. Our big watermelons weigh about 35 pounds and we’ve got smaller ones. The heavy ones are hard to carry.”

Renfroe said she’s doesn’t know how any watermelons are left in the field.

“The weeds are trying to take them but weeds are good,” she said. “They shade the watermelons and they won’t get blister spots.  But I do know we’ve still got a lot of melons and I’ll be right here selling them.”