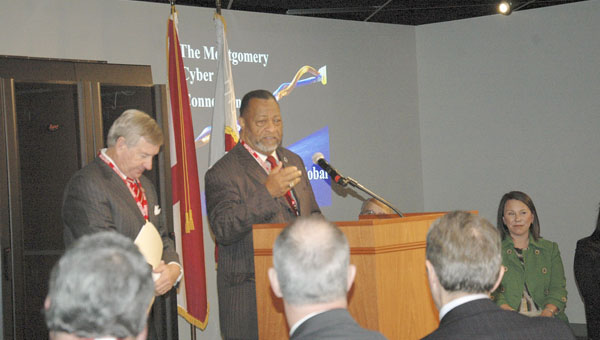 Messenger photo/Jaine Treadwell
Elton Dean, chairman of the Montgomery County Commission, introduced Montgomery Mayor Todd Strange at Wednesday’s new conference at the RSA Dexter Avenue Building. The conference was held to announce that Montgomery is the first city in Alabama with an Internet Exchange.

Montgomery Mayor Todd Strange joined other city leaders Wednesday in announcing that Montgomery is the first city in Alabama and just one of four cities in the Southeast with an Internet Exchange.

“Today is a historic day for Montgomery,” Strange told a full house at the Wednesday news conference at the RSA Dexter Avenue Building. “The Montgomery Cyber Connection is an initiative that will connect every person, business and device to the rest of the world at the speed of light. This means faster internet connections and a significant economic impact for the River Region and all Alabama.”

An Internet Exchange Point is a facility where Internet Service Providers and networks of proxy servers exchange Internet traffic. The exchange will increase Internet speed in the River Region by storing content locally and will be housed in the Retirement Systems of Alabama’s Dexter Avenue Datacenter.

Strange explained that rather than an email driving to its connection online from Montgomery to Birmingham to Atlanta and back to Montgomery, it can connect at high speed locally in Montgomery via the Montgomery Internet Exchange.

“We cannot overstate the significance of the Montgomery Cyber Connection to expanding industry in the River Region and putting Montgomery on the map thanks to Dr. David Bronner and our military leaders and neighbors at Maxwell Air Force Base,” Strange said. “This partnership and initial investments made by the city, the county, the Chamber and several local business leaders are the first steps to unleashing a wave of economic development that may rival Hyundai.”

To put how big that is into perspective, the Hyundai development has created an annual economic impact on Alabama of nearly $5 billion.

The Internet Exchange is the first in Alabama and the fourth in the Southeast. According to the Montgomery Chamber of Commerce, the Montgomery Cyber Connection opens up a new vertical industry target and job growth potential for the River Region. It will link Alabama’s universities in research collaboration, support the new Air University Cyber College’s mission to strengthen national defense and stimulate business development and tech startups. It will also boost the Montgomery metro economy and improve the quality of life for area residents.

Gen. Steven L. Kwast, commander and president Air University, Maxwell Air Force base, was introduced at the news conference as the “brain child” of the Montgomery Internet Exchange. However, Kwast said he was among city leaders who had a vision and gave rise to that vision without thought of who got the credit.