Trojans bounce back in 66-57 win over Texas State 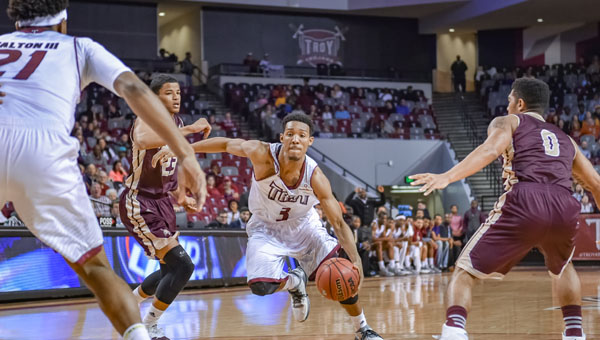 submitted Photo/Chris Davis
Wesley Person attempts to drive the lane Saturday afternoon against Texas State. Person and the Trojans picked up their conference win of the season by defeating the Bobcats 66-57.

The Troy Trojans picked up their first conference win of the season by defeating Texas State 66-57 on Saturday.

The Trojans (6-11, 1-5 in Sun Belt play) hope they cleared away their demons with a convincing home win.

“It was a much-needed win right there,” said Trojan head coach Phil Cunningham. “We had to have one. With what we have coming up, that would be a tough challenge to take an 0-6 record over there. I was really proud of how we bounced back after a miserable second half for all of us on Thursday night.”

The Trojans lost to Texas-Arlington 90-63 on Thursday, prompting the players to evaluate what they wanted from their season.

“It felt great coming off that game on Thursday night,” said Wesley Person. “That was an embarrassing loss. We made it our focus that we weren’t going to lose another one. We came out and were locked in and we got the win.”

The Trojans were outscored 50-30 in the second half of the Arlington game and Cunningham said it was as if the dam broke. The Trojans had lost their previous four games by a total of 18 points and after giving up their first half lead, it was too much for the Trojans to handle.

“All those close losses and the fact that Arlington was incredible led to that,” Cunningham said. “The only thing I said after the game was the only way we can begin to erase that second half is to come back and do whatever it takes to win the game on Saturday and they did that tonight.”

“We put pressure on ourselves,” said John Walton III. “We called each other out as a team and our coaches called us out . We wanted to step up and win the game.”

“If you ask any coach in this league who is the toughest man-to-man defensive team in this league and I think without a doubt everybody would say Texas State,” Cunningham said. “For us to shoot 49 percent against those guys is pretty good.”

Person led the Trojans in scoring Saturday with 23 points. Walton and Jeremy Holllimon also finished in double figures with 14 and 13 points.

The Trojans will hit the road and take on the ULM Warhawks at 7 p.m. Thursday.

submitted Photo/Colin EdwardsJordon Varnado attempts a layup against Texas-Arlington on Thursday night. Varnado and the Trojans lost to the Mavericks... read more