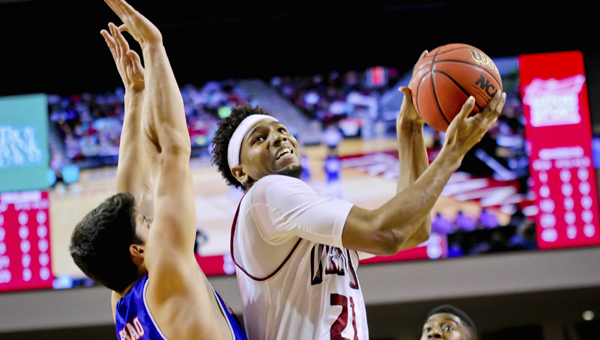 submitted Photo/Colin Edwards
Jordon Varnado attempts a layup against Texas-Arlington on Thursday night. Varnado and the Trojans lost to the Mavericks 90-63.

The Troy men’s basketball team couldn’t hold on to a commanding first half lead and fell at home to UT-Arlington 63-90 on Thursday night.

After going up by 15 midway through the first half, the Trojans (5-11, 0-5 Sun Belt) fell apart defensively in the closing minutes of the half and were never able to recover. A well-executed defensive scheme as well as lights-out shooting from beyond the arc by the Mavericks (13-2, 4-0 Sun Belt) was all that was needed to earn the come-from-behind victory.

Troy got out to a hot start in the contest, with freshman forward Jordon Varnado scoring 13 in the first half to give the home team an early double-digit lead. Good defense turned into points on the other end for Troy, who seemed like they were only a couple possessions from cruising to an easy victory. Varnado led the Trojans in scoring with 19 points.

However, a colossal 36-12 run stretching from late in the first half until midway through the second turned the game in the Mavericks’ favor. UT-Arlington was led by a balanced scoring attack behind 21 points from junior guard Jalen Jones, as well as 22 from sophomore forward Kevin Hervey.

The Mavericks closed out the first half on a run that saw them come back from a 15 point deficit to a 40-33 lead going into halftime.

In the second half, UT-Arlington continued to dominate in nearly every category, shooting 49 percent from the field and holding Troy to just 29 percent. Troy had no answer for the Mavericks’ offensive attack, and UT-Arlington rode out its commanding lead to its eighth straight victory.

The loss was Troy’s worst this season since its 16-point loss at home to UAB on Nov. 19.

Troy will look to bounce back and snap its current losing streak at home against Texas State on Saturday. Tipoff is scheduled for 4:15 p.m.