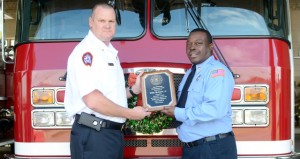 Willie McGuire, a senior firefighter with the Troy Fire Department, recently received the Humanitarian Award for his services to the community outside of the fire department.

The Pike County Firefighter Association presents this award once a year.

“It’s an honor and a great privilege knowing that your work doesn’t go unrecognized, even though we don’t do it for the recognition,” McGuire said. “Even though we are paid firefighters, it is really from the heart. It’s a blessing to be honored.”

McGuire has served with the Troy Fire Department for 15 years, serving the community where he grew up. He said he is fulfilling his childhood calling.

“I feel like I am fulfilling this calling to the best of my ability,” McGuire said.

Capt. Buford Stephens said he is proud of McGuire for receiving the award.

“There were several letters written on behalf of McGuire outside of the fire service, and that is why he was presented this award,” Stephens said. “I am very proud. It shows what kind of people we have in our organization, and that we go above and beyond our call even when we are off duty.”

Many people inspired and encouraged McGuire throughout his life, and he said that these people helped mold him into the man he is today.

First, McGuire attributed his success to his team.

“I am thankful for my coworkers,” McGuire said. “We don’t look at each other as coworkers. It’s just one big family. We are one big undefeated team.”

Aside from his team, McGuire said others have been influential, as well.

“My brother Worthy instilled in me at an early age the difference between a job and a career,” McGuire said. “He often told me life is more than just dreaming and wishing. You have to grab that star, hold onto it and always remember to put God first.”

“He took me under his wing when I was 15,” McGuire said. “I was doing things I shouldn’t have been doing, but he kept me on the right track.”

“All these people have been a major influence in my life,” McGuire said.

PLAS students are exposed to the Under Age Under…