PLAS students are exposed to the Under Age Under Arrest program 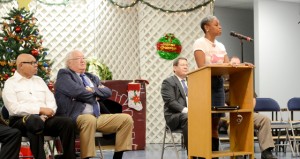 MESSENGER PHOTO/COURTNEY PATTERSON
Students at Pike Liberal Arts School learned the importance of the law as they heard about the Under Age Under Arrest program. Above, Carolyn Tyus, with Mothers Against Drunk Driving (MADD), shared the story of how she lost her son because of a drunk driver.

Most of today’s youth believe they are “bullet-proof,” as Dean Argo, the Alabama ABC Board manager of government relations and communications, said to students at Pike Liberal Arts on Thursday morning.

He also told the students they, in fact, are not immune to disaster. And while no one control being hit by a drunk driver, students can stop themselves from driving drunk and drinking underage.

Argo, along with several special guests, was presenting the Under Age Under Arrest program.

“We are trying to drive home a point to (the students) that if (they) are caught with alcohol, are caught consuming alcohol or caught after the consumption of alcohol, (they) will be arrested,” Argo said.

Argo shared some statistics with the students, saying he was shocked when he learned them himself.

According to Argo, 70 percent of 18 year olds said they have had alcohol. He also said that more than 3 million college students admitted to drinking and driving.

“We want you to remain safe and grow up and become successful and lead Alabama to greater heights,” Argo said. “You can’t do that under the influence of alcohol.”

Officer Brent Routon with the Troy Police Department joined Argo to enforce the Under Age Under Arrest program.

“Underage drinking is prohibited in Alabama,” Routon said. “There are no exceptions.”

He explained that no matter what, an underage drinker will be arrested, and juveniles do not have the right to a trial by jury. A judge will make the decision alone.

“I’m here to give (the students) a warning,” Routon said. “We care about what happens to (them). It could drastically change people’s lives, not just (theirs).”

Carolyn Tyus, with Mothers Against Drunk Driving (MADD) Alabama, shared the story of her son being killed by a drunk driver.

Tyus was on a field trip to Orlando with her 12-year-old daughter and woke up in the middle of the night to more than 20 missed phone calls from family members.

“My sister told me I had to come home right away,” Tyus said. “She told me my son and been in a car accident.”

At first, Tyus assumed it was a simple fender-bender, but that was not the case. “I asked to speak to him, and (my sister) broke down and told me he was gone.”

Originally her plan for after the trip was to take her son to lunch and go shopping for things he would need for summer school at the University of Alabama in Tuscaloosa.

“Instead when I returned, I had to find a casket and do funeral arrangements,” Tyus said. “No parent ever wants to bury their child.”

Tyus explained that the difference between a car accident and a car crash is that a crash is 100 percent preventable.

Tyus told the students to be leaders and not a follower because the choices they make could drastically change and affect not only their lives, but the lives around them.

“We just want you to understand the consequences,” Tyus said.

Argo told the students that the choice is up to them. Because they are underage, the only way they can obtain alcohol is through adult. Just because an adult says it is okay, doesn’t mean that it is.

“The reason (the students) are here is because we cannot leave it to adults to take care of you,” Argo said. “We have well-meaning adults making bad decisions. We need (them) to make the smart and legal decisions.” 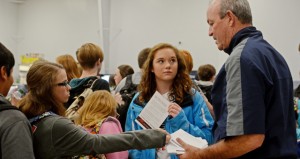 MESSENGER PHOTO/COURTNEY PATTERSON
Students turn in their pledges to be alcohol-free.

Each student was given a card to pledge to be alcohol free until the age of 21. Those who decided to do take the pledge filled out the card and submitted it at the end of the program.

“I took a pledge to be alcohol-free when I was 14 years old,” said PLAS Headmaster Becky Baggett. “I never broke that pledge. I hope (the students) will consider the same.”