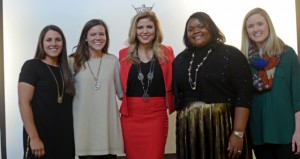 Barbie dolls decorated each table at Female Factor on Wednesday, not to be “girly” but to embrace the theme “You can do anything.”

Miss Alabama Meg McGuffin agreed with that statement, for the most part.

“It says you can do anything, but you can’t be this size,” McGuffin said gesturing to one of the dolls.

McGuffin compared the doll to real-life measurements, saying that if the proportions were correct, the woman would be 5’6” and 120 pounds and her body weight would be so low that she couldn’t bear children.

Healthy should be the goal, not skinny. McGuffin explained that healthy looks different on everyone and that a size zero is healthy for some, but it is not healthy for all.

“When you decide to fall in love with the body that you have and the skin that you are in, only then can you truly love your body,” McGuffin said.

McGuffin encouraged all the women at Female Factor to throw away their scales at home and not let them define them. McGuffin is proud that she does not know her own weight. 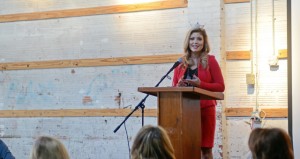 “I have clothes that fit me,” McGuffin said. “I put them on and I walk out the door.”

Four women were honored at Female Factor for their outstanding achievements in the community. Each was presented with a gift basket, including a Barbie doll that represented their accomplishments.

Alex Ingram, a Pike Liberal Arts alumna created a wedding dress for her best friend, which jump-started her design career. Since then, she has designed multiple bridesmaids’ dresses, a flower girl dress and is currently working on two other wedding dresses, including her own.

Toni Deveridge Jones graduated from Goshen High School as valedictorian in 2002 and began her career in the insurance industry in 2006. Now she is the vice president of transportation marketing for Palomar Insurance Corporation, handling a $15 million book of business.

Taylor Smartt followed in the family footsteps and began to play baseball until she was 12, when she was “forced” to switch to softball. That didn’t stop her, as she played as a six-year varsity letter winner for Charles Henderson High School. She moved on to Troy University and was a four-year starter for the Trojans. She is now serving her first year as the assistant softball coach at Troy University.

Finally, Suzanne Ventress Tompkins comes from a long line of medical professionals, and decided to become one herself. She completed the physician assistant program at the University of South Alabama in July 2015 and is currently employed at Cahaba Medical Care in Centreville, Woodstock and Bessemer, Ala.

After collecting donations for several months at Female Factor meetings, the board announced the completed $1,500 donation to Lindsey’s Legacy, a donation fighting childhood cancer.

Female Factor, sponsored by Troy Regional Medical Center, among other local sponsors, holds a meeting the second Wednesday of each month at noon in The Studio in Downtown Troy.