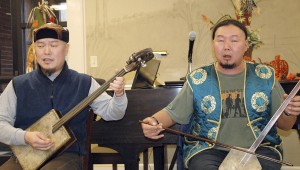 MESSENGER PHOTO/JAINE TREADWELL
The Alash Ensemble performed at the Troy Nutrition Center Monday morning and thrilled the senior adults with music they had never heard before, throat music. The ensemble will be in concert at 7 p.m. tonight at the Claudia Crosby Theater on the campus of Troy University. Pictured are ensemble members, Ayan-ool Sam and Ayan Shirizhik.

The seniors at the Troy Nutrition Center heard music like they had never heard before when the Alash Ensemble of Tuva performed for them Monday.

Throat singing was new to most all of the seniors but Alice Henderson, said she will never forget how beautiful the music was.

Alash has won numerous international awards in Tuvan throat singing, a technique that allows vocalists to sing multiple pitches at the same time.

“I didn’t even know music like that existed, either, said Shelia Deveridge, Troy Nutrition Center director. “The singers could make so many different sounds in their throats at the same time that it sounded like recordings. It was amazing.”

Deveridge said it was refreshing to listen to music in a different language and still find it so enjoyable.

“We want to thank the Troy Arts Council for bringing the Alash Ensemble to the Troy Nutrition Center and allowing us to be so wonderfully entertained,” she said. “We probably would never have had an opportunity to hear music like that and we greatly appreciate it.”

Throat singings is an ancient tradition that was developed among the nomadic herdsmen of Central Asia, people who lived in yurts, rode horses and raised yaks, sheep and camels and had a close spiritual relationship with nature. Singers use their voices to mimic and interact the sounds of the natural world that include whistling birds, bubbling streams, blowing wind and the deep growl of a camel.

The ensemble sang a “country” song about horses and pretty women for the clients at the nutrition center.

Although it wasn’t the kind country music that is familiar to the South, Mary Daniels said she loved it and was so proud to get a chance to hear a kind of music she had never heard before and might never hear again.

John Jinright, TAC presenter chair, said the Alash Ensemble performed at schools in Goshen and Brundidge Monday and will perform at several other schools in the county today and Wednesday.

The general public will have the opportunity to hear the Alash Ensemble at 7 p.m. tonight at the Claudia Crosby Theater on the campus of Troy University. Tickets are $20 and $5 for students and will be available at the door.

“This is a rare opportunity to hear this kind of music,” Jinright said. “To the Tuvan ear, a perfectly pure sound is not as interesting as a sound that contains hums, buzzes or extra pitches that coexist with the main note being sung. Handmade Tuvian instruments are designed and played to produce multi-textured sounds as well.”

The Alash concert will be a unique experience and everyone is invited.

I Choose Life Ministries is feeding the community for Thanksgiving, not only with a Thanksgiving meal but also with something... read more