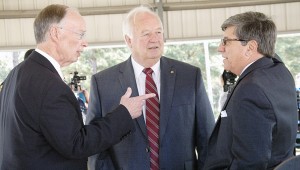 Gov. Robert Bentley visited Brundidge Thursday to tour Southern Classic Food Group and to announce the awarding of two grants to the city, totaling $722,300 to assist with industrial development in the city’s North Industrial Park.

Bentley said the grants will support the private/public partnership and assist with the growth of private enterprise.

“Sen. Jimmy Holley and Rep. Alan Boothe have done a fantastic job of letting me know what is needed in this area,” Bentley said. “I do my best to honor those needs.”’

Bentley said the $250,000 Community Development Block Grant (CDBG) is federal dollars with a state match and is designated primarily for rural areas.

“Sometimes we have the match money and sometimes we don’t,” the governor said. “This time we do.”

The CDBG grant funds will help assist in getting water and sewage to the proposed Magnolia Vegetable Processors (MVP) facility. MVP will provide new jobs and increase productivity at the city’s industrial park. 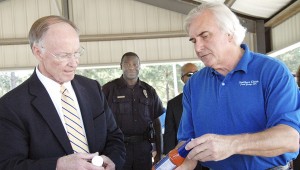 The city also received a $472,300 Industrial Access Grant related to an access road, which will extend Magnolia Boulevard and lead to the future site of Magnolia Vegetable Processors.

Bentley said Thursday’s visit was his first to Southern Classic Food Group so he didn’t know the scope of the food manufacturing industry in Brundidge.

Bentley said he was surprised to find so many familiar names on the products that are “made” at Southern Classic Foods in Brundidge. He expressed his pleasure in awarding the grants that will assist with the expansion of the food manufacturing industry in Brundidge.

Chuck Caraway, owner and president of Southern Classic Foods and Magnolia Vegetable Food Processors, expressed his appreciation to the governor for the grant awards and for his continuing support of industrial growth in Alabama. 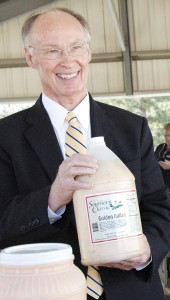 “The Industrial Access grant will go toward a road in the North Industrial Park and will be an incentive for the development of other businesses,” Caraway said, adding that by working together good things happen.

Caraway said trees have been cleared at the future site of MVP and hopes are to break ground soon for the 66,000-square-foot facility. Production is expected to begin in May 2016.