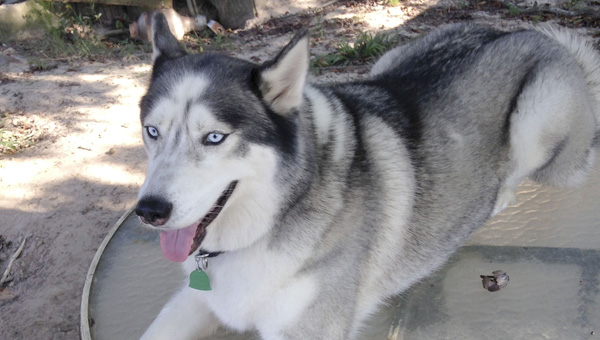 Bandit won the Humane Society Pet Photo Contest for 2015. He will be featured on the cover of the organization’s fund-raising calendar for the upcoming year.

The Humane Society of Pike County’s Pet Photo Contest is in the books and it’s all over but the shouting … perhaps, barking.

Dogs took eight of the top 14 places in the 2016 Pet Photo Contest with Bandit, the “baddest of them all,” and the best friend of Steve and Dell Stokes declared the winner with 975 votes.

Donna Brockmann, contest chair, said the 2016 Pet Photo Contest was a huge success and raised $11,000 for the Humane Society of Pike County’s annual projects that include the spay and neuter, feral cat and ‘Friends in Need’ programs.

“People were very generous with their voting and every unselfish,” Brockmann said. “Everyone realizes that the money raised helps to reduce the number of abused and neglected animals in Pike County and they want to be a part of this worthwhile cause.”

Brockmann said there were many touching stories tied to the humane society’s fundraiser.

“I wish I could share them all but one that comes to mind is of two ladies who pooled their money and voted for each of the entries,” she said.

“Another is of a little girl who saved her nickels and dimes and voted five votes from her favorite pet.

“Of course, Bandit has a wonderful story that will be made public now that he is the 2016 Pet Photo Contest winner. But we congratulate all of our winners and all of those who entered the contest. It took each pet to make this year’s Pet Photo Contest a success.”

The 13 pets that received the next highest votes will be the Pets of the Month on the 2016 Pet Photo Calendar beginning with January 2016 and continuing through January 2017.

Ella Weez Webb, the tabby of Mary Tyler Webb, came in second place with 786. It was a nip and tuck race until the final hours when Bandit turned on the afterburners and outdistanced the field.

The top 13 finishers will be featured as Pets of the Month beginning in December 2015 with Ella Weez Webb.

Other Pets of the Month will be in second place Bella and Buddy, canines of Virginia Hamm and Alice Hayes; Maya, canine of Dr. Patricia Block came in third and, right at Maya’s heels, was former Pet Photo winner, Cali the cat of JoAnn Echols.

In fifth place, was Copper the Pet Chicken of Daniel and Rachel Garrett with Bonnie Everage’s canine, Harper, within a feather of overtaking the chick.

Another chick, Katniss was behind by a beak, giving Daniel and Rachel Garrett two feathered best friends in the top finishers.

Four dogs rounded out the Pets of the Month Top 13.

Sheldon and Teresa Doty’s Champ and Bubba, Stella Hughes’ Nigel and Ed and Pat Leonard’s CiCi finished fast to give credence to the old adage that “every dog has its day.”

Brockmann again extended thanks to everyone who entered their pets, those who voted and the businesses that collected votes on behalf of the humane society, Troy Antiques, The Little Framery, Guynn’s Income Tax and Bookkeeping Service and Jinright’s Antiques. She also expressed appreciation to those who shared information about the contest and purchased ads.