Voter fraud coming to an end 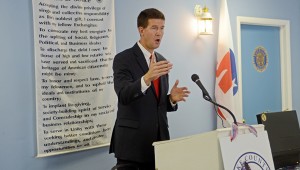 Merrill began with discussing what he has done for the people of Alabama since taking office.

His main concern was not wasting the people’s money. Merrill examined state employees to see who was doing what they were hired to do.

Merrill has also created policies to review every bill and invoice, so that he is aware of where money is being spent.

“People were spending and wasting money, but we didn’t know how much was being wasted,” he said. “That has ceased.”

“With a little bit of effort, it’s amazing what can be done,” Merrill said. “You have to be intentional.”

Merrill addressed the issue of voter fraud through absentee voting. He said that the issue is something he feels strongly about and is researching in order to bring change.

“I want to make sure that people are following the law,” Merrill said.

Merrill described a situation where an individual would call about a voter fraud, being sent to person after person, and no one in Montgomery was actually concerned with the issue.

Now, Merrill said, complaints or concerns can be sent directly to him on the Secretary of State site, www.sos.alabama.gov, and submit the inquiry. From there, he will submit the information to the Alabama Law Enforcement Agency to investigate the issue.

Since this process, three convictions for voter fraud have been made in Houston County.

Merrill has made efforts to visit all 67 counties in Alabama with a voter registration drive. “I’m not going to let this happen to our people who are trying to do it the right way,” Merrill said.

Merrill also announced to the PCRW that military men and women will be able to vote electronically.

“If it were not for those people doing what they are doing, we couldn’t be doing what we are doing today,” Merrill continued. “That’s why that’s so important to me.”

Merrill said this concept would be presented to the state in March for the counties that want to participate.

Miss Alabama visits GHS to tell them to stop letting the scale define them, it’s ‘ridiculous’