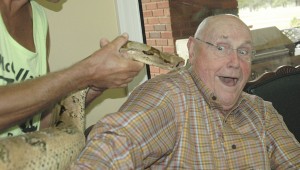 The lunch meeting of the Troy Rotary Club Tuesday turned into a zoo with Rotarians scampering hither and yon.

Mike McClelland, owner of McClelland’s Zoo near Banks, was the program guest of Rotarian Henry Stewart. All was quiet and orderly until McClelland “uncaged” a couple of pythons. The first snake was small and rather unobtrusive.

McClelland draped the python around Margaret Stewart’s neck and it made an interesting choker … which it almost did.

But, when he uncaged the big boy, a 40-pound python with the strength of John Henry, the steel-drivin’ man, the Rotarians got a little wigglesome. 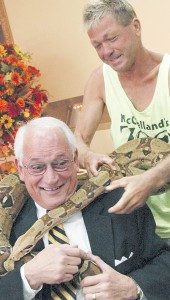 McClelland had the situation well in hand but some of the Rotarians weren’t exactly sure so, when in doubt, “remove yourself,” said Rotarian Vicki Pritchett, who did just that.

McClelland’s Zoo, which started as a place where special needs children and adults could go and interact with the animals, is now a full-scale zoo. For most of its 20-plus years, the zoo has been a Pike County best kept secret.

The zoo is located in rural Pike County near Banks but nearer Ebenezer, which McClelland said is an ideal, natural setting for a zoo.

“I love animals. The zoo is my passion,” McClelland said and added, laughing, that one day he got the Sears catalog and started ordering animals for his zoo. 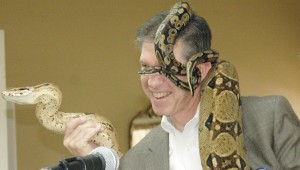 MESSENGER PHOTO/JAINE TREADWELL
Troy Rotary Club President George Tarbox was relatively at ease when embodied by snakes at the Tuesday meeting of the Troy Country Club.

The state-licensed zoo is located on 70 acres and has more than 100 animals including goats, miniature horses, snakes, birds, monkeys, deer, grizzly bears, black bears, kangaroos and lions, tigers and 1,500-pound ligers that are a cross between a lion and a tiger — 20 large cats in all.

“McClelland’s Zoo is different from most zoos in that you can get closer to the animals,” McClelland said.

“I give tours and go in the cages with every animal. I even let a grizzly eat a marshmallow out of my mouth. I’m not afraid of any of the animals.”

The zoo owner said his goal is to educate people about the animals so they will understand and appreciate them.

The Rotarians quizzed McClelland on the cost of feeding such a large “family.”

He said the large meat-eating animals consume more that 440 pounds of raw meat a day and the other animals require about 600 pounds of dog food a week.

“So, if you harvest a deer and you don’t want the meat, I’ll take it,” he said. “But the cats will not eat wild hog meat. They will drag it around for a couple of days but they won’t eat it. I don’t know why.”

Someone asked if any animals had ever escaped the zoo.

“They don’t want to get out,” McClelland said, with a smile. “They’re happy here.”

Trojan fans gather on The Square to watch game

MESSENGER PHOTO/JAINE TREADWELLTroy University scored an early field goal in Saturday’s game against the Wisconsin Badgers and got he Trojan... read more