Trojan fans gather on The Square to watch game 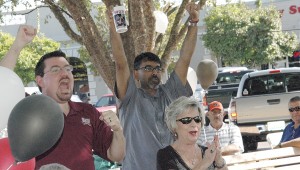 MESSENGER PHOTO/JAINE TREADWELL
Troy University scored an early field goal in Saturday’s game against the Wisconsin Badgers and got he Trojan faithful up and vocal. From left, Aaron Taylor, Sohail Agboatwala and Judy Morgan reacted to Trojan score. A large crowd of Trojan fans participated in the Watch Party on The Square in Downtown Troy Saturday afternoon.

Leigh Ann Windham, City of Troy, said the Watch Party was an opportunity for Trojan fans to come together in the spirit of community to cheer the Troy University Trojans.

“The Troy-Wisconsin game was on the Big 10 Network and Troy Cable got the game for us. We appreciate Troy Cable’s efforts to make the Watch Party possible,” Windham said. “This was a unique opportunity for those of us, who didn’t travel to Madison, Wisconsin, to see the game on big screen TV. It was fun and exciting to watch the game on the square with Trojan fans of all ages.”

Auburn fans watched the Auburn Tigers on a separate TV hookup on the square.

But most of the “bleachers” were filled with Troy University students, high school students, children and adults.

“Although our Trojans didn’t win, they played a good game and gave us lots to cheer about,” Windham said.

“We were proud of the Troy University Trojans.” 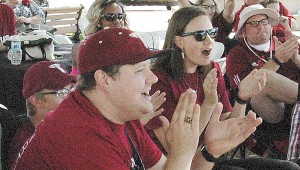 MESSENGER PHOTO/JAINE TREADWELL
A large crowd of Trojan fans participated in the Watch Party on The Square in Downtown Troy Saturday afternoon.

Aaron Taylor, Troy Trojan Vision, said the Watch Party provided a great atmosphere in which to watch the game.

“Being there would be the best way to watch the game but the Watch Party was second best,” he said.

Earl Ellis, Troy businessman, said the Watch Party was a good way to bring the community together to watch the game and was also an opportunity for people to visit downtown Troy and its eateries and boutiques.

The Watch Party was the second in the Fall Parties on the Square series.

“The first Fall Party was on Aug. 29, when we had an open mic with Lenny Trawick followed by live music with Blackberry Breeze,” Windham said. “It was a lot of fun and we’ll continue the fun with tailgating and live music on the square at our next Fall Party on Oct. 2, which is the Friday night before Troy University’s home game with South Alabama.

“Tailgating will be from 4 until 6 p.m. and then Henry Everett’s band, ‘Casual,’ will play until 9 p.m. This will be a great way to kickoff a home football weekend.” 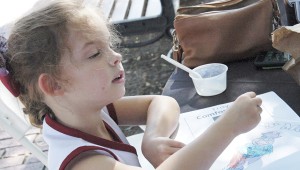 MESSENGER PHOTO/JAINE TREADWELL
A large crowd of Trojan fans participated in the Watch Party on The Square in Downtown Troy Saturday afternoon.

On Oct. 16, the Fall Party will be a Homecoming Block Party followed by Fifth Saturday on Oct. 31 and Friday Night Tailgate on Nov. 14.

“We have something different planned for each of the Fall Parties on the Square,” Windham said. “We encourage everyone to mark their calendars for all of the parties on the square. The parties are a fun and exciting ways to support the Troy University Trojans, enjoy great music and experience the fun and fellowship of being with friends and neighbors.”