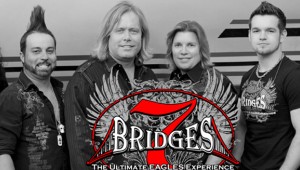 7 Bridges, an Eagles tribute band, will be in concert at the Claudia Crosby Theater at 7 p.m. Monday. The concert is the Troy Arts Council’s kickoff event for the 2015-2016 concert season. It’s also Teacher Appreciation Night and all public school employees will be admitted free with an ID. Tickets are $20 and $5 for students with an ID.

The Troy Arts Council will kick off its 2015-2016-performance calendar with 7 Bridges: The Ultimate EAGLES Experience at 7 p.m. Monday at the Claudia Crosby Theater on the campus of Troy University.

7 Bridges is a Nashville, Tennessee based Eagles tribute band.

Joel Williams, TAC president, said the Eagles band was an extremely popular rock band during the 1970s and 1980s but he said ‘rock’ band rather loosely.

“Anybody that appreciates vocal harmony will enjoy 7 Bridges,” Williams said.

“Their harmonizing and instrumentation is of the highest level. It’s outstanding. They play guitar duets and, when they sing a cappella, the harmony is unbelievable.”

The 7 Bridges’ concert is the TAC’s first concert of the season and it is also Teacher Appreciation Night.

“Public school employees will be admitted free with their school IDs,” Williams said. “That includes teachers, administrators, support staff and bus drivers. The TAC wants to let these school employees know that they are appreciated. This is our way of saying ‘thank you’ for what you do for our children.”

“What some people may not know is that ‘Seven Bridges Road’ was written by Steve Young when he was in Montgomery in the early 1960s.”

Williams said the story is that a group of Young’s friends showed him a road that led out of town and, after crossing seven bridges you were out in the country on a dirt road.

Along the road were moss-covered trees, old farms and fences, graveyards, churches and streams — an ideal place to get away from it all.

Young said he thought his friends made up the name “Seven Bridges Road” but later found out the road had been called that for a hundred years.

“The road is Woodley Road in Montgomery,” Williams said.

“There are stars in the Southern sky, southward as you go. There is moonlight and moss in the trees down Seven Bridges Road.”

Williams said the music of the Eagles will be familiar to many and new to some but everyone at the 7 Bridges concert Monday night will be well entertained.

Tickets for the 7 Bridges concert at $20 and $5 for students with an ID.

“Because this is the TAC’s first concert of the season, we will have season tickets available at the concert,” Williams said. “If you purchase a season ticket Monday night, the 7 Bridges concert will be included in the season ticket.”

Williams said the TAC has an outstanding lineup for the calendar year. Information about upcoming concerts will be available at the 7 Bridges concert.

The Troy Board of Adjustments approved the placement of a new 55-foot billboard at 1007 U.S. Highway 231 at Firehouse... read more