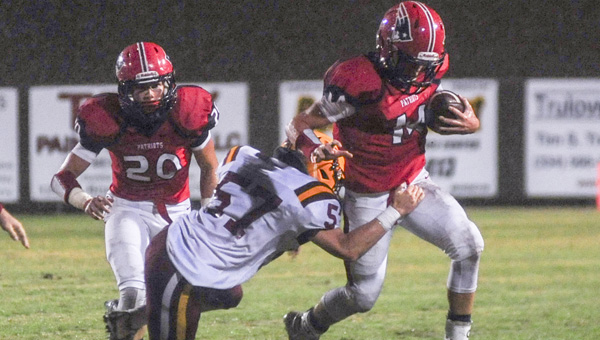 PLAS’ Reed Jinright breaks from from a Monroe defender on Friday.

The Pike Liberal Arts Patriots couldn’t get their momentum going against the Morgan Academy Senators on Friday, falling 21-13.

Pike Liberal Arts head coach Gene Allen said he would take blame for the team’s second loss of the season saying he felt he hadn’t prepared the team well enough.

“I really thought tonight we would be a lot better,” Allen said. “I thought we would be more focused, but we weren’t ready to play. There were too many penalties, too many missed tackles. We just had a lot of little things that killed us. That’s my fault.”

Allen said the Patriots struggled in practice this week, and that carried over to the game. “Monday wasn’t a bad practice for us. We came in, watched some film and had a decent practice. We just had some days that weren’t up to par, where we thought it needed to be.”

Morgan was able to capitalize on Patriot fumbles, and Allen said fundamental mistakes have plagued the team for the past two weeks.

“Morgan came out and played harder than we did,” Allen said. “We just didn’t play that hard. We made a lot of mental mistakes. We’ve just got to work on it. It’s a lot of fundamental stuff, a lot of discipline stuff. We’ve got to get tougher physically. They were really physical tonight. Monroe was a lot more physical than we were two weeks ago. We’ve just got to get a lot more physical.”

While Friday’s game was riddled with missed tackles, fumbles, penalty flags that dampened the Patriots’ spirit and momentum, Allen said newcomers JT Ball and Dacoda McConnell gave the team a glimpse of how well they can play when the athletes leave their all on the field.

“They are both great kids, really good players,” Allen said. “They throw a lot to the table. Dakota is a really good receiver, and JT does a good job running the ball, he has good hands and he helps us out on defense some also. They fit in really well at the school. The kids love them, but we’ve still got to get better as a team.”

Morgan, who had previously been 0-2 for the season, ended their losing streak Friday. Senators’ head coach Jake Wingo said after having only garnered one win last season and already losing two games during the 2015 season a win was much needed.

“This feels good to win,” Wingo said. “Our guys played hard. They played four quarters of football. It was the first time we’d done it this year. I was proud of them … We have a very tough schedule. We’ve been worried about ourselves. Not worrying about the other team just worrying about ourselves, and our guys have responded. We really came together tonight.”

The Patriots, 1-2, will take on Evangel Christian Academy at home next Friday on DeWight Ward Field with kickoff slated for 7 p.m. Allen said the team would hopefully come out having turned a complete 180 from Friday’s performance.

“We’ve got to,” Allen said. “Like I told them after the game, we need to look at ourselves and see how bad we really want to play. We still need to decide if that’s what we want to do.

“We’re a lot better football team than we’ve showed the last couple of weeks, so we’ve got to find something inside of us that gets ready to play and wants to win.”

The Zion Chapels recorded their first home win since 2012 on Friday when they defeated Calhoun 35-18. Coming into their... read more