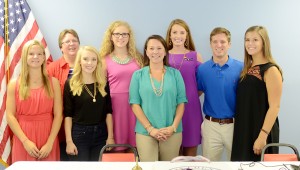 Roby detailed her frustrations with the country saying we had seen major societal shifts and changes with the upcoming Iran deal and the way veterans are treated in the United States.

“We want America to be the country for our children that it has been for us,” Roby said. “I’m not going to give up the fight … I’m going to continue to fight because I am hopeful that we can still turn this ship around.”

Roby said she knows many of her constituents had been disappointed with her after she had told them that if Republicans were to gain a majority in the House and Senate a change would be made and the change hadn’t come yet.

“I am disappointed in Senate leadership,” Roby said. “Elections matter and elections have consequences. I share in your frustration, but think of all we have prevented from happening by having the majority … I know you’re frustrated. I am, too, but that motivates me even harder as your member in Congress.”

Roby said what concerned her most about the Iran deal, which will verifiably prevent Iran from acquiring a nuclear weapon and ensure that Iran’s nuclear program will be exclusively peaceful going forward, is that no matter what it is a lose-lose situation.

“When has Iran ever played by the rules,” Roby asked. “I don’t think it is an accident that our enemies have an even larger presence today. I went to the Middle East this past spring and saw up close and personal of how terrible and how awful this enemy is. I don’t know what mechanism we will get to fund our government and our military but I am recommitting my charge to you.”

Roby urged attendees to the meeting and others to call elected officials who might still be on the fence on the Iran deal and persuade them to vote against it.

“I am hopeful that those people who have stated they are for this deal are having a hard time at home with their constituents,” Roby said.

“I’ve been asking and pushing for more than a year,” Roby said. “Now, quite frankly, I’m done asking. Our veterans can’t afford to wait any longer.”

Roby said she has spoken with the director of the VA several times and had even proposed a fee-based service run through the VA that would allow private doctors to see veterans in need.

“If we can’t do right by our veterans, we can hang the rest up,” Roby said.

Roby also spoke on the issue of former first lady and Secretary of State Hillary Clinton’s secret email server, contents of which allegedly discuss the details of the Benghazi case where four Americans lost their lives.

“This happened on her watch and all of those who answer to her have to take responsibility of their actions,” Roby said. “This is like any investigation where you have to compile evidence.”

Most notably, Roby spoke on the allegations levied against Planned Parenthood and their use of illegal abortion techniques to harvest the body parts of aborted fetuses.

“There are eight videos,” Roby said. “They are graphic, but I encourage you to at least watch the first video and listen to the callous and casual way they describe how they harvest the parts … We are hoping to get a standalone bill in front of the president and force him to defend this organization. If this is acceptable, who do we think we are as a country?”