GOATS AND GOVERNORS: Flowers pens tell-all novel about his time in government 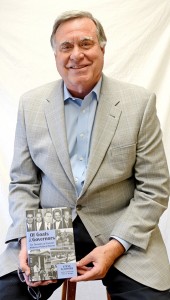 MESSENGER PHOTO/COURTNEY PATTERSON
“Of Goats and Governors, Six Decades of Alabama Political Stories” by Steve Flowers, popular political columnist and commentator, is now available for sale. The book is a guide to Alabama’s colorful political history. Book signings for Flowers will be from 5 until 7 p.m. Sept. 10 at the Johnson Center for the Arts in Troy. Two book signings are set for Sept. 11, from noon until 2 p.m. at the Troy Public Library and from 3 until 5 p.m. at the Tupper Lightfoot Memorial Library in Brundidge.

Flowers is Alabama’s most watched and read political columnist and commentator. His column on Alabama politics appears weekly in 66 Alabama newspapers, therefore, cultivating fertile ground for his peephole into Alabama’s fascinating political history.

“Few states have as fascinating a political history as Alabama, especially in the post-World War II era,” Flowers said. “I was fortunate to have rubbed elbows with some of the most interesting figures in 20th century American government and politics.”

At age 12, Flowers was a page at the Alabama State Capitol for State Rep. Gardner Bassett.

“I was standing outside Gov. George C. Wallace’s office with another page and

Gov. Wallace came out and said, ‘Steve, you and your friend come on and go eat lunch with me,” Flowers said. “Twelve years old and I was having lunch with the governor.”

But it didn’t just happen that Flowers was at the capitol. He was there as the little buddy of Bassett who had realized his passion for politics and was grooming him for the political arena.

“I grew up on Maple Street in Troy and, back then, a lot of prominent men lived on North Three Notch, Orange and Maple Streets,” Flowers said. “Even as young boy I had a keen interest in politics. I guess I was born that way. State Representative Gardner Bassett and Pike County Probate Judge Ben Reeves both realized my passion for politics and took an interest in me.”

Flowers said Reeves was his mentor but he and Bassett developed a close personal relationship.

“Mr. Gardner would let me go with him down to the Riverside Café on The Square in Troy and listen to men talk politics,” Flowers said. “He’d take me on road trips that had to do with politics. We’d take off in his Chrysler New Yorker and we’d be going down the highway at 70 miles per hour. Curly Long, the state trooper everybody feared, would just wave us on by. That’s when I first realized how important politicians are.”

When George C. Wallace was elected to his first term as governor of Alabama, Bassett introduced Flowers as “my little page and best buddy who’s going to follow me in the House.”

Fast forward to 1982. At age 30, Flowers was elected to the Alabama House of Representatives and he didn’t just represent Pike County; he represented Wallace’s district as well – quite an honor for the young representative, who became a part of Alabama’s political history,

Most of the stories in “Of Goats and Governors” are told from Flowers’ own recollections. Others are retellings of stories that were told to him. Some of the stories were told specifically for the book and some by sons of the governors.

Flowers shares stories about Miss Mittie, the little lady who sat in the corner at the State House, not saying much but knowing all that went on all over the capitol building.

“She knew everything from how a legislator voted on a bill to what he had for dinner,” Flowers said, laughing.

A lot of the stories are about politicians from all across the state but some are straight out of Pike County.

“One of the best races in Pike County was the classic race for probate judge in 1958 between Ben Reeves and Gardner Bassett,” Flowers said. “Ben Reeves was unbeatable. He was a political genius. He knew the numbers. He knew where the votes were and who the votes were. He once said he didn’t care what people thought about him as long as he got 51 percent of the votes.”

Flowers didn’t skirt round the fact that votes were often bought and sold and how that played into the election process. He talks about campaigning from the “stump” and how entertainers such as Minnie Pearl helped politicians into office. He talks about the times when politicians took to the streets to shake hands and kiss babies all for the sake of a vote.

“Those are the bygone days of politics,” he said. “The South has provided the country with the most colorful characters in political history and Alabama has had more than its share. I wrote the memoir because I wanted their stories to be told because they are stories worth telling now and far on down the road. These politicians were a different breed. The old-time politicians are gone but their stories are a huge part of the legacy of the South. They need to be told.”

Flowers served in the Alabama House of Representatives from 1982-1998. During his 16-year tenure, he recorded a perfect attendance record. His House colleagues honored him as Outstanding Freshman member in 1982, Most Ethical member in 1988 and Most Outstanding member in 1992.

CIRCUS FUN: Cirque Millenia brings the ‘Circus of the…