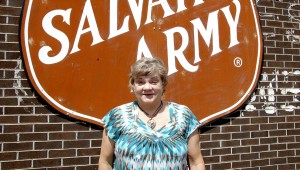 Messenger photo/Quinta Goines
Donna McClaney has served the community through various ways for the past 10 years.

Donna McLaney of Pike County has always been a people’s person, but over the past ten years her community involvement and love of doing good for the people around her has grown.

McLaney, 61, has always lived in Pike County between Troy and Brundidge. She attended Pike County High, started a family and according to her lived some of her best days right here at home.

Donna McLaney is the mother of two sons, Casey of Troy and Paul of Atlanta and she is the widow to Keith McLaney.

After her husband died in 2007, her involvement in various organizations throughout the county helped her cope.

“I had just been asked to help with the kettle bell fundraiser for the first time, and that really helped me through the first year of his death, especially through Christmas,” McLaney said.

Aside from her work at the Salvation Army in Troy, McLaney finds herself spending about 15 hours a week giving back to the community.

McLaney recently finished her second term as the Exchange Club president, but she will remain as the district director for the organization. This year she was awarded the club’s award called Book of Golden Deeds for her dedication and service.

McLaney is the treasurer for Pike County Republican Women, she volunteers at Troy Regional Medical Center in any department that needs help and she has been linked to helping Sav-A-Life and volunteering at the J.O. Colley Senior Complex.

She is a member of Brundidge Historical Society. “I really enjoy being apart of this group because we try to preserve Brundidge’s history,” she said. “I was also a member of the play this past year too.”

McLaney is also a member of Antioch Baptist Church where she is the music director.

When she is not participating in her volunteer activities, she enjoys shopping, cooking, traveling and line dancing with the participants of the Colley Senior Complex.

“On Sunday I usually cook for my son Casey and his family,” she said. “My grandson just loves coming over and eating with me.”

Cooking is an art, and it’s an art that requires a key ingredient. Now, there truly is a KEY. The... read more