Dennis Griffith of Troy has been installed as president of the Alabama District Exchange Clubs. He took office at the Exchange Clubs state convention at Vestavia Hills the last weekend in June.

“I was honored to be sworn in as the 2015-2016 Alabama District president,” Griffith said. “I promise to work hard for the Alabama District during my term. I pray that this coming year will be the best our district has ever had. We have an awesome team assembled and together and can lead the way for new club buildings and club recruitment.”

Griffith said the Alabama District has 26 clubs with 700 members, and he will look to his six years as a member of the Troy Exchange Club for leadership of the District. 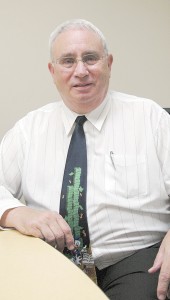 MESSENGER PHOTO/JAINE TREADWELL
Dennis Griffith of Troy has been installed as president of the Alabama District Exchange Clubs.

“Alabama’s District Exchange Clubs focus on prevention of child abuse, promotion of Americanism and service projects for the community and youth,” he said. “Those ‘pillars’ have been and will continue to be the focus of all we do. But we must also maintain our existing clubs and increase membership in them and, at the same time, build more clubs.”

Griffith said he will work with Exchange Clubs around the state and assist with new clubs that are organized.

“Much of what I will do as Alabama District Exchange Clubs president will be problem solving and club building,” he said.

As a member of the Troy Exchange Club, Griffith has been involved with club building on the college campus and on the high school and junior high school levels.

Griffith said with decreasing numbers in many civic and service organizations, it is important to involve young people with these organizations so the work of the clubs will be carried forward.

“It’s also exciting to be a part of the first Exchange Club in the nation that will be chartered under the new National Exchange Club President Dan McQueeney,” Griffith said.

For Griffith, the Exchange Club is his way of being a part of the community and a way to give back to the community.

“The first time I attended a meeting of the Troy Exchange Club, I knew that I wanted to be a part of it,” he said. “I saw what the club was doing with the ACE awards and the potential of these young people who had overcome great obstacles in their lives. What they were doing was, by the grace of God, a miracle.”