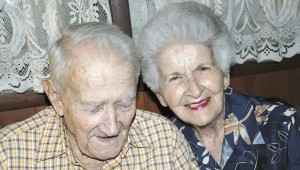 MESSENGER PHOTO/JAINE TREADWELL
Dick and Jean Barr celebrated 68 years of marriage on Monday. While they celebrated, they shared memories of their beginnings.

Laughter is good for the soul and it’s also good for “an old man who can’t see anymore,” said John Dick Barr Jr. as he settled back in his favorite chair to savor the memories of 68 years of marriage.

His bride, Jean, was “off in Troy” and he took the opportunity of her absence to do a little bragging on her.

“When I saw Jean for the first time, she was singing in the choir at Oberlin College in Ohio. I thought she was the cutest little girl there ever was,” Barr said. “She really caught my eye.”

The Barrs celebrated their 68th wedding anniversary Monday at their home in Banks. Barr said he wasn’t interested in going out on their anniversary. He would be satisfied with whatever was in the refrigerator and time with that little girl who is “still as cute as she ever was.”

When Dick Barr first saw Jean Williams at Oberlin College, he was serving his country with the United States Marines.

“I wanted to go out with her but she was engaged,” Barr said. “I told her we could go out for a hamburger, just as friends, and she finally agreed.”

Jean Williams agreed to several friendly meetings with Barr over the next six weeks. Then he was shipped out to China. They corresponded for a while, then not at all. He gave up thoughts of ever seeing that cute little girl again.

“When I got out of the service, I looked into the GI Bill as a way to go to college,” Barr said. “Several of my buddies were going back to Oberlin College and I decided to go back, too.”

As Barr was walking across the Oberlin campus one day, he heard someone yell, “Hey, Dick Barr Jr. from Banks, Alabama.”

“I looked up and saw that cute little girl waving to me from three stories up in the dormitory,” he said. “I told her to come down and we’d talk over old times.”

The couple talked as friends but Barr was “very much interested.”

“I saw that I was making a little headway and I kept at it,” Barr said, laughing. “Time rocked on and Jean was going home to Troy, Pennsylvania. I offered to take her and finally she agreed. It was 300 miles and I enjoyed every mile.”

In June 1947, Dick Barr Jr. and his mom and dad drove from Banks, Alabama, to Troy, Pennsylvania for him to take a bride, the cute little Jean Williams.

“We got married in the Methodist church that Jean had grown up in,” Barr said. “We stayed around for a while after the ceremony before we left on our honeymoon to Harrisburg, Pennsylvania. It was late and we were afraid we’d lose our reservations so we stopped and got ice cream cones for our wedding supper.”

A few days later, the young married couple arrived in Auburn where he was enrolled at Alabama Polytechnic Institute. And the groom had a surprise waiting for his bride – a 20×14-foot house that he had built for her in five days time and for $500.

Barr said he had searched to no avail to find a home sweet home for him and his bride.

“Back then, there was no place in Auburn for married couples to live,” he said. “I’d looked everywhere. Finally, I found this old man that said I could build a little house on his land and not have to pay him a cent. But, when I finished school, the house would be his. I took him up on that.”

Barr raked and scraped for building supplies and enlisted the help of his dad and a couple of Bullock County boys, who were cousins. Together, they built a house for him and his bride that had a bedroom, a kitchen and a bath and electric lights and running water.

The Auburn newspaper carried a story about the young API student who built a house for his bride “There was a picture in the paper of us cutting a watermelon on the porch,” Barr said. “It was a little house but Jean said she was so proud of me and she wanted everybody to see our house.”

And Barr said he was proud for everybody to see that cute little girl that was his wife.

Jean Barr arrived home Monday in time to do a little bragging on her husband who is the best husband in the world and the finest man she’s ever known.

When the Barrs moved to Banks, his “hometown,” Barr wanted to farm but not cotton or peanuts. He loved animals so he thought dairy farming would be his calling.

“My family was in the dairy business in Pennsylvania and Dick appreciated the way the family worked together at the dairy,” Jean Barr said. “He wanted that kind of life for us.”

The Barrs and their children, John Dick III and Suzanne, built a strong family bond at Tiago Way Dairy in Banks. The Barrs’ marriage remains strong at 68 years and counting and all because he loves her “dearly and she loves me.”