ArtTalk to be a ‘Joyous Exchange’ 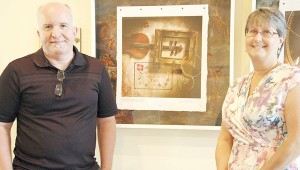 Messenger photo/Jaine Treadwell
Jerry Johnson and Diane Orlofsky, along with Pam Allen, will be featured at ArtTalk from 5 until 7 p.m. Thursday at the Johnson Center. The public is invited to attend the “Joyous Exchange” among the artists.

Jerry Johnson had only to sit with Diane Orlofsky a short time before he realized that what she was asking, he could not do.

Orlofsky and Johnson are professors at Troy University. She is a choral conductor and he is a professor of design. Orlofsky’s request of her friend was that he illustrate a book she had written, titled “Meditations.”

Orlofsky wrote the book at intervals as she sat with her dying father. The words were lyrical and she could hear the music as she wrote. Memories and music filled the pages.

Reading it, Johnson became so moved that his commitment was not to just illustrate a book for Orlofsky but to illuminate the words that she had penned in such a way that both the artwork and the words would take on a spiritual quality – that the words would be illuminated through a “joyous exchange.”

Johnson and Orlofsky will be featured at ArtTalk along with the their colleague Pam Allen from 5 until 7 p.m. Thursday at the Johnson Center for the Arts. The public is invited.

Johnson and Orlofsky will talk about the 13 pieces that were co-created over more than year’s time.

They will talk about Johnson’s desire to take the simple elements of Orlofsky’s life and create designs that not only tells her stories but encompass the passion and the spiritual quality of her life.

“My dad played the violin until he was 12 years old. Then he had to go and work the fruit and vegetable truck,” Orlofsky said as she shared the story that inspired one of Johnson’s creations. “The only song my dad and I sang together was ‘Just a Closer Walk With Thee’ and there are elements of the needlepoint cushion I stood on to deliver dramatic readings when I was a child. It’s all there, the violin, the song, the needlepoint. It’s my story.”

Each of the 13 pieces, each of the “joyous exchanges” has deep meaning not only for Orlofsky but also for Johnson.

“These illuminations brought great freedom to me as an artist to arrange compositions that explore relationships between the predictable and the unpredictable,” Johnson said. “I have attempted stay true to the Joyous Exchange by joyfully connecting disparate elements to achieve some range of believability or not.”

Allen’s artwork is equally intriguing as she conveys much of her life through the incorporation of simple elements.

Her grandmother’s quilt pattern, which she illustrates so vividly, is also a focus of Johnson’s work and Orlofsky’s words.

“When asked, I usually say that my work is about life, which can sound a little narcissistic,” Allen said. “But, in truth, it is about family and the deeply rooted values passed from generations.”

Vicki Pritchett, Johnson Center executive director, said for those who attend the Johnson Center Orlofsky and Allen ArtTalk Thursday will have a unique opportunity to be a part of the “joyous exchange” between gifted artists,one a graphic designer, one other, a music maker and one a painter who ventures to try new mediums.

“The ArtTalks make the artwork personal and those who attend the ArtTalk on Thursday will immediately connect with them as they talk about the pieces in the show and how they found a way to make each one a joyous exchange through the art of collaboration,” Pritchett said.