TROY BELLES: Troy Belles to rely on experience and skill in Sub-District Tournament in Eufaula 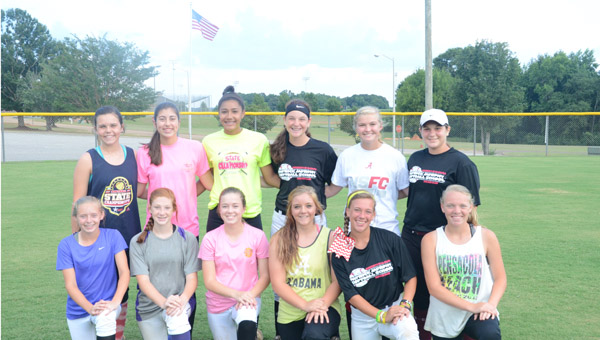 With many former players returning to the Troy Belles tournament softball team, the girls have more than enough experience heading into serious tournament play.

With all of the girls having played at the high school level, chances already looked good for the team, but with eight players returning from last year’s team head coach Larry Sanders is eager to see what this summer’s season has in store for them.

The 2014 Troy Belles tournament team gave the league a run for their money coming in at third during last year’s World Series. However, Sanders said with a group of girls between the ages of 13 and 15, Sanders said he knew he had a full-spread of talent on his team.

“We have a real talented group,” Sanders said. “All twelve girls can play multiple positions. We have four to five pitchers, so having that pitching depth should be good for us. We should also be a real good hitting team. We have a lot of girls that have the power to hit the ball out.”

With a team full of girls, Sanders is sharing the responsibility of molding the Belles into a championship team. Sanders’ assistant coaches are Cody Sanders and Shane Calhoun.

Sanders bragged on the depth of the pitching staff for the Belles, and said having several arms to switch between would be beneficial because of the strict rules the Dixie League places on pitchers. Pitchers may only pitch 15 innings throughout the tournament.

“It really comes in handy when you have multiple pitchers in your rotation,” Sanders said. “We will try and have each pitcher go about two innings per game. Last year we ran into teams with only three pitchers, and that really hurt them.”

Having a limit to the number of innings the girls can throw is a big difference for the girls coming off of high school softball where a limit wasn’t placed.

If the girls stay focused on playing the game the right way, Sanders said he knows there are good things in store for his team but knows the girls can’t let their guards down just yet.

“We need for them to take it serious,” Sanders said. “They know they are talented, they just have to play, and know when to take it serious. I probably take it a little easy on them, but come game time they will step it up.”

The Belles will head to the South-Dale Sub-District Tournament this weekend where they will take on Eufaula, Opp and South-Dale.

The Belles will take on Eufaula in Game one of Friday with a first pitch scheduled for 8 p.m.

While the Troy Coach Pitch tournament team has had to practice all over Troy to get ready for the District... read more