‘a gem atop a hill’: CHHS, Troy community mourn loss of teacher who influenced thousands of lives 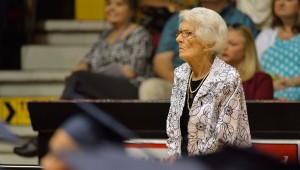 Betty Wagoner, pictured at the 2015 CHHS graduation ceremony, shepherded decades of senior classes through graduation and life during her tenure as a teacher and senior class sponsor at the high school. She passed away on Friday.

No one lives forever, but perhaps some should.

Betty Wagoner was one of those.

A retired teacher who never really retired “Wag” as she was affectionately known, died Friday morning.

As news of her death spread, a community began to mourn.

“Wag loved everybody and she made everybody feel that they were special,” said Hank Jones. “She is – she was – truly the gem atop the hill.”

Jones was using the phrase Betty Wagoner used so often to describe Charles Henderson High School, the place where for more than 45 years she nurtured and tended to her “young’uns” as a teacher, yearbook sponsor and senior class sponsor. She shepherded her most recent class of graduates across the stage just three weeks ago, and over the years she touched thousands of lives.

“I was trying to think of who would have had that type of impact and influence that she had,” said Troy Mayor Jason Reeves. “I graduated 25 years ago and for years before that, and for generations since then she’s been the senior sponsor of CHHS. Every student who has passed through there has been impacted by Betty Wagoner.

“They’ve gone on to work at every business in Troy, work in government, go to every church in town … you can’t circulate in this community and not run into one of her products. I don’t know of anyone like that.”

Simply because of that reach, her loss will be felt far and wide. “From a community standpoint, as the mayor of this community, I can tell you we’ve really suffered a loss here … she can’t be replaced.”

Jones, a former superintendent of Troy City Schools, started working with Wagoner in 1972, when he joined the system. She was already well established as a teacher and director of federal programs. “She evolved from Mrs. Wagoner when I first stared to Betty for a short while to, finally, Wag.”

That moniker was one that stuck across the generations, a term of endearment and respect shared by students, co-workers, principals and superintendents.

“Not taking anything away from any of us as superintendents or principals at CHHS, but there were so many things that got done on schedule simply because Betty Wagoner ensured they were going to take place.”

Dr. Boyd English, who recently resigned after serving as CHHS principal for four years, called her “the glue that held CHHS together.”

“She was someone who transcended generations,” he said. “She was the glue to that school in some of the toughest times. She made that school what it is today, and she’s not somebody you can replace.”

David Helms, who also was principal at CHHS, struggled for words to describe Wagoner and her impact on the school.

“I’ve tried to reflect on Betty Wagoner and the first thing that comes to my mind is that she was a Southern lady,” Helms said. “Then, I think of the thousands of lives that she affected in such a positive way. Betty could relate to kids unlike anything I’ve seen in my life and she did it as good today as she did 40 years ago.

“She could be in a crowd of teenagers or in the middle of senior adults but she was never the old one in the crowd and that was by design. She would not have it any other way.” 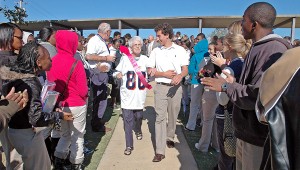 Wagoner began her education career in the 1960s and celebrated her 80th birthday with her “young’uns” at CHHS in 2011. She passed away on Friday.

Helms said everyone who knew Wagoner is a better person for having known her.

“She had such an effect on everybody,” he said. “And, the main thing was that she was so genuine and she was the most honest person. Betty always told it like she saw it. It might not be what you wanted to hear because she was not going to sugarcoat things. ‘Here’s the way I see it,’ she would say and then she would tell you exactly how she ‘saw it.’”

Helms, laughingly, remembered when meeting a new administrator, Wagoner walked up to him and said, “I’m not sure I like you, yet.”

“There has never been anyone else like Wag and there never will be,” he said. “And, there will never be anyone who can influence kids like she did. They respected her and they loved her and they never wanted to disappoint her.

“Betty always put others before herself. Words can’t explain Betty Wag. She was one of a kind. She will forever be missed.”

Wally Lowery, a former student who is now president of the Troy City School Board of Education, could only echo Jones’ sentiments on Friday.

“She was the gem atop a hill, as the CHHS son says,” Lowery said. “She will truly be missed.”

Dr. Lee Hicks, superintedent of Troy City Schools, had worked with Wag for the past four years. “She is Charles Henderson High School,” he said. “And her memory will live on through the lives she touched.”

State Rep. Alan Boothe, R-Troy, called Wagoner an “institution.” “Her heart and her life were within the walls of CHHS. She loved those kids and they loved her. She would call and ask me to help her kids. ‘Whatever you can do for my kids, I need you to do it.’ She cared about her kids. This is a sad day for Charles Henderson High School and for Troy because everybody loved Betty Wagoner.”

Wagoner’s influence was felt far beyond the boundaries of CHHS. She was involved in the Troy community and her name was synonymous with the arts.

“Betty was on the ground floor of developing what was then the Troy Council on the Arts and Humanities and now the Troy Arts Council,” said Pat Duke, council member. “She was there when the arts council was establish in the early 1970s and she remained a fixture with the council.”

Wagoner served the council as its treasurer and Duke said she kept the organization financially straight.

“Sometimes we were too anxious to spend money but Betty kept us straight,” Duke said. “But she was overly generous with her time and energy.

“Betty was the backbone of the TAC,” he said. “She had been with the council since the beginning and she took a lot on her shoulders. She was in charge of the awarding of ribbons at the arts festival. She took care of all of that and she was always willing to help everybody out. Betty was an amazing lady. I don’t know what we’ll do without her.”

Mack Gibson, chairman of the Troy-Pike Cultural Arts Center, said he had great admiration for Wagoner.

“Betty was an extremely dedicated proponent of the Troy Arts Council and was faithful in keeping it going,” he said. “What I appreciated about Betty was her willingness to speak her mind. She never waffled and you always knew where she stood and, if you stepped back and thought about what she said, you’d know she was right.”

Gibson said Wagoner worked tirelessly for the arts in Troy and Pike County.

“There’s no question in my mind that Troy is a better community because of her influence,” he said. “Her influence will continue through the generations of the kids she taught and through the arts programs that she supported. She was a pioneer in the arts in Pike County and there are not many of those left. She will be greatly missed.”

Charles Adams has been a friend of Wagoner for about 60 years. He can remember when she would come out to Adams’ Nut Shop and sit and eat boiled peanuts and talk shop.

“She was a genuine and gracious lady,” he said. “What made her so special was her commitment to school kids and her dedication to the community. She did things for kids that no one will ever know about because Betty didn’t want anybody to know. But those kids know and I’m sure they have a special place in their hearts for her.”

A few years ago, Adams who is a glass artist, created an angel in Wagoner’s honor. It was named the Betty angel.

“When she saw it, she cried,” he said. “A lot of people are crying today for the loss of her.”

Bags & blues: Little Jimmy Reed gets locals up, off their feet for a musical Brown Bag experience

Messenger photo/Courtney PattersonLocals gathered on the Square in downtown Troy to listen to Little Jimmy Reed while they ate their... read more