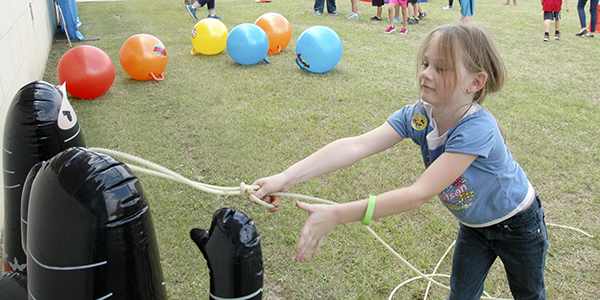 The Troy Public Library was the training ground for the Super Hero Academy Tuesday afternoon and more than 100 Super Hero wannabes attended.

The youngsters, ages 4 through 11, honed their skills by learning the secrets of the Incredible Hulk’s powerful punch, the climbing skills of Spiderman, the lasso expertise of Wonder Woman, the ability of Superman to fight off deadly kryptonite and many other secrets too secret to be told, said William White, Troy Public Library director.

“The Super Hero Academy is the place to hone the super skills of super heroes,” White said. “We had a rock climbing wall brought in from Birmingham and that was something extra. We wanted the kids to come out and have a good time and I think they have.”

White said the library hopes to inspire young people to read during the summer while offering a variety of fun, learning events. The theme for this year’s summer library program is “Every Hero Has a Story” and is designed to encourage and motivate young people to read about their heroes, super or human.

Teresa Colvin, children and young adult librarian, said the summer library program for ages 4 through 11 was already filled to capacity however, the Super Hero Academy was open to all kids in that age group.

“Because the Super Hero Academy was going to be an outdoor event, we could open it up to a large number of kids,” Colvin said. “I had a hundred stickers and I’ve given them all out and I’m sure I’ve missed several.”

Colvin said the Super Hero trainees could select the activities they wanted to try Tuesday. “Some of them tried just about everything while others did one or two activities several times,” Colvin said. “We were proud to be able to offer this event to all the kids who wanted to come.”

Colvin said there will be another activity that will be open to all kids and for ages four through 18.

“We invite all the kids who have ever dreamed of being a superhero to ‘Create Your Own Superhero’ and participate in a costume contest at the library,” Colvin said. “There will be three age categories and we’ll have $50-prizes for the winners in each age group.”

The “Create Your Own Superhero” contest will be at 6 p.m. June 18 at the Troy Public Library. There is no entry fee and pre-registration is not required.