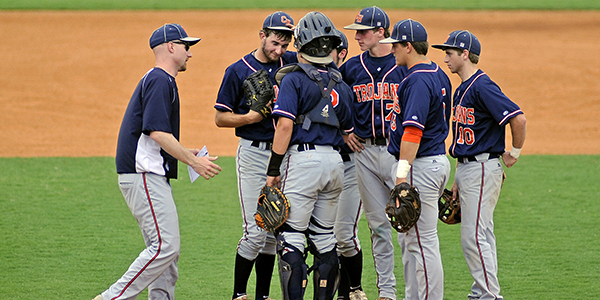 Charles Henderson baseball head coach Derek Irons announced to CHHS team members Wednesday that he would be leaving Troy to accept a position at Oak Mountain in Birmingham. Irons had been with the CHHS Trojans for seven seasons and earned two state titles during his time there.
MESSENGER PHOTO/THOMAS GRANING

It was a day many Charles Henderson High baseball fans dreaded but expected, and that day came Wednesday when head baseball coach Derek Irons met with his team to inform them that he had accepted an offer at Oak Mountain High School in Birmingham.

In seven seasons Irons has taken CHHS baseball to unprecedented heights, winning two state championships and amassing incredible numbers that drew attention from across the state and nation.

With the conclusion of each season it was well known that Irons received numerous offers to take over baseball programs at other schools, but each time Irons graciously declined.

The offer from Oak Mountain was one that made the most sense for himself and his family, and it was an offer he could not turn down.

“We have loved Troy from the first day we moved here seven years ago,” Irons said Wednesday, shortly after meeting with his players. “We’ve always felt that for us to leave Troy there would have to be an opportunity that we could not say no to and that time has come. Our family has grown during our time here and we feel it’s in the best interest for our family to get closer to both my parents and Leslie’s parents. I am forever grateful for the opportunity to be the head baseball coach at Charles Henderson High School. We are so grateful for the opportunity to have been a part of such a special community for this season of our life.”

Irons took over the CHHS baseball program in 2009, and in seven seasons amassed a 221-62 overall record, equating to a 78 percent winning percentage.

CHHS was also ranked No. 1 for the first time ever under Irons, and held that ranking for 18 total weeks. The last three years have been especially strong, with the Trojans going 40-3 in 2013 and winning a state championship, 41-10 in 2014 and repeating as state champions, and finishing 35-4 in 2015.

During Irons’ tenure, the Trojans were ranked nationally in four separate services, advanced to the quarterfinals or beyond six times in the last eight seasons, and made 17 consecutive playoff appearances.

And it’s that track record that made Irons both a key for the CHHS program and a desirable recruit.

“Coach Irons has a reputation in the state that is second to none,” said Dr. Lee Hicks, superintendent of Troy City Schools. “He’s thought of almost as a baseball guru … We hate to lose anyone of that caliber teacher and coach. “But as I’ve stated before, when you have teachers, coaches and administrators who are successful you’re going to have other systems who want them.”

However, Hicks said he understands Irons’ motivation. “Ultimately I think it was a family decision,” Hicks said. “I know he loves Troy and loves this community, but ultimately your family guides you.”

Irons’ relationship with his players paved the way to a special career with the Trojans.

“I wish all the guys in Troy could play for him because he is such an awesome coach,” said former CHHS Trojan Joey Denison. “I definitely learned a lot from him, not only about baseball but life as well. He always preached about controlling effort. You can always give 100 percent in everything you do.”

The success of Iron’s and the Trojans has made an impact on Troy University baseball coach Mark Smartt, as well.

“I am awfully proud for Coach Irons for this opportunity, he has definitely earned it,” Smartt said.. “He has done wonderful things at both Charles Henderson High School, as well as in our community. He will be sorely missed by many people.”

Assistant coach Sam Kitchens, who has spent more than 40 years coaching both rec league and high school teams, said Irons was an exceptional coach and mentor.

“He has been a great asset to the program and the community. He is one of the finest not just coaches, but people, I have ever known.”

Irons replaces Brian Breeze, who coached the class 7A Oak Mountain Eagles from 2011-2015. The Shelby County Schools board of education is expected to finalize the contract on Monday.

Hicks said he would meet with school administrators to begin the search for Irons replacement.