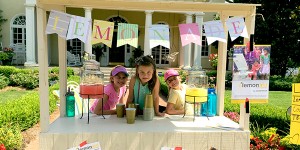 Nearly 1 billion people worldwide live without access to clean water, but Sarah Gray and Campbell Baker took the time out of their Saturday to host a LemonAID stand in hopes to decrease that number.

The Bakers hosted a LemonAID stand Saturday from 10 a.m. until 2 p.m. and raised just over $550 for the project NeverThirst, which helps advance the gospel through clean water efforts worldwide. Since 2009, NeverThirst has completed over 2,500 water projects providing over 325,000 people with access to clean water through local churches in India, South Sudan, Central African Republic, North Africa region and Cambodia.

“It’s important, because they could die without clean water,” Campbell explained. “All the stuff came in this little folder and they asked people around if they wanted to do something for NeverThirst. We said ‘yes’ and then we figured out we were doing a lemonade stand.”

The girls sold lemonade for $1 a cup and cookies for 50 cents. Their mother, Stephanie Baker, said a neighbor donated tea cakes to help the girls raise a little more money and it just showed one of the ways the community had stepped up to support a great cause.

“We literally put up two posters and a few social media posts and had an amazing response in such a short amount of time,” Stephanie said. “Once people found out their donations were going towards a ministry project, very few people asked for change and most gave donations well beyond a $1. We even had a neighbor bring us tea cakes she baked for us to add to the menu in hopes of the girls getting a little bit extra for the charity.”

Stephanie said she was thankful for the amount of support, which had been so great the girls are already discussing plans for a second stand.

“It was a very hot day, but it was a reminder of where the money will go,” Stephanie said. “It’s wonderful to see your children getting excited about helping others. The girls think missions are fun, and I hope they always will. NeverThirst is only one of many ministries that having similar lemonade stand could fund. We’ve had such a great response with several people commenting they would like to donate more or get involved in some way, so we are already talking about doing it again.”

Sarah Gray said the project had been fun even though it was so hot because she was always happy to help people.

“It’s been really fun, because those people don’t have any water,” she said.

Campbell shared similar thoughts on the why the project was so important. “We don’t need it because we already have all the stuff we need and clean water. They don’t, so it always makes me feel good when we donate something that people need.”

But, it wasn’t all work for the girls on Saturday. Campbell said several of their friends came by to help, which made the day that much more fun.

“It’s been a lot of fun,” Campbell said. “We had breaks and our friends came over and helped us, so it’s been lots of fun.”

Tucked away in the shade on The Square, Lindsay Lee and Krishna Patel enjoyed a beautiful day in Troy and... read more